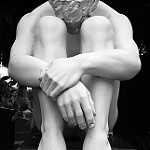 For my own part, I continue trying to keep a sense of historical perspective on matters of humankind’s evolution...