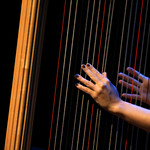 Sometimes, all we want and need is a short declarative bellow hooked into something hummable and danceable.

“I wanna hold your ha-aa-aa-a-anddd!”

Other times, we slow the pace, lower the volume and still ourselves for a close listen to a story as it unspools from the mind and imagination of a singing poet as she frames a multi-layered tale across time, space and memory.

At 40 years old, the nearly unclassifiable Joanna Newsom has been telling such tales for two decades now as a singer-songwriter and harpist. (Yes, the harp!)

Hints of classical music accompany the harp, of course, like wispy clouds joyriding in an aural mashup that wafts along with strains of indie folk, “chamber folk,” avant garde, jazz, and hybrids called “baroque pop,” “freak folk” and more, all part of her singular musical soundscape(s).

Newsom also plays the harpsichord and piano, which she has put into service in settings ranging from small clubs with a rock foursome to concert halls accompanied by symphony orchestras from London to Sydney to Brooklyn.

All while tending to a voice that shifts from child-like to husky, piercing to plaintive, lilting to tremulous.

Counter-intuitively but perfectly sensible with a moment’s thought, she’s also a fan of rap because she, too, is besotted with inventive wordplay.

Two self-recorded and released albums in 2002-03 garnered Newsom enough of a near-cultish following to bring her to the attention of the Chicago-based indie label Drag City. The label remains her musical home today, offering an open canvas for her considerable flights of creative fancy that rarely if ever hew to the commercial constraints of song length, structure, and immediately accessible meanings.

Add in her less than conventional rhythms, melodies and voice timbre and we get the whole package of a fiercely independent artist dead-set on exploring her own vision for music-making that doesn’t read or sound quite like anyone else (though Joni Mitchell fans may see fit to engage that discussion). 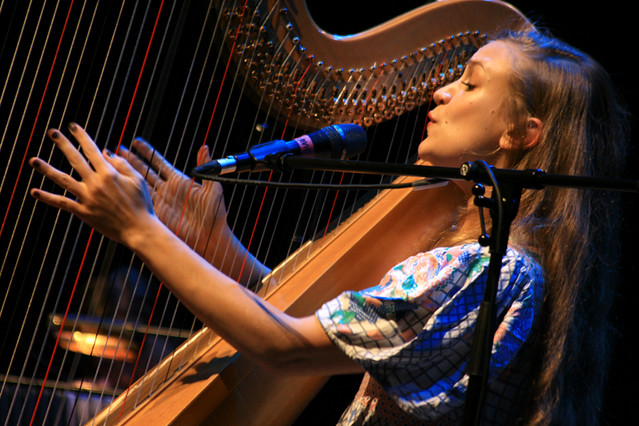 “Baby Birch” is unquestionably about mourning the loss of a baby. But that’s pretty much the only thing this nine-minute-and-thirty-second cascade of emotion and bracing imagery doesn’t leave open to question and any given listener’s interpretation, starting with the source of the songwriter’s loss.

Abortion? Miscarriage? A decision to remain childless? The failure of a relationship that left dreamt-of children unborn?

All of these can be put forward as frameworks for what might actually have happened. But with an artist such as Newsom, steeped in myth, poetry, literature and historical allusions, there’s little reason to think actuality serves as much more than a building block for all that flows through her work.

Instead, it’s the emotional terrain, wordplay and musicality that matter, the exploration of which offers up intrinsic rewards to both creator and audience that are not dependent on literal renderings.

In such free-form creativity, the road is better than the inn, the open sea superior to the harbor. Her songs consistently beg big questions but just as consistently refuse the beggar, short-circuiting our Need to Know and redirecting us (and herself) to the tensions and ramifications of deep feeling, tenuous grasps and uncertainty.

“Baby Birch” is a long and fascinating wallow in sadness and regret, some of it named and understood, some obscure and opaque. The You Tube rendering below scrolls the lyrics across the screen; feel free to go there now if you like, or pick up some more intro first.

It begins by telling us exactly what it is about:

“What we’ve done…” and “…close the door on you” suggests agency on part of the parents, sounding here like they’ve made a choice. But about what?

To abort? Place for adoption? Depart from each other and remain childless?

Do you remember staring
Up at the stars
So far away in their bulletproof cars?
When we heard the rushing, slow intake
Of the dark, dark water
And the engine breaks
And I said

Has there been an accident, a crash into a lake with a stalled engine and in-rushing waters?

No matter. The overarching (and aching) point is loss, absence, the unrealized could-have-beens.

Is Baby Birch in heaven? Adopted out to another home with no contact for that “long, long time?”

There’s that agency again. But what was the nature of that metaphorical door?

Let’s give it a listen and reading here before some concluding comments.

The squawking of a mama goose “cussing” while protecting her eggs can be humorous when one encounters it, but just reminds the mother in this tale that she has no such privilege. And then we go darker still:

These ghastly images bring back the specter of abortion or miscarriage, with surgical tools “cutting away” at her “only joy.” 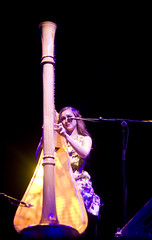 Newsom (a distant cousin to the California governor) is married to the comedian Andy Sammler, with whom she shares a 4-year-old daughter. Lest anyone think she cowers under her bedcovers as a brooding existentialist, she appears buoyant, engaging and accommodating in interviews and on stage, flashing a whimsical humor and unlike the narrator above, open to joy.

But that’s life, after all. The good, the bad. Melancholy and mirth.

The luxury of pondering it all, and with luck and commitment, the privilege of turning it into an exploration and expression unique to one’s self.

Though her intensely musical-minded physician parents barred her from television and radio exposure during her childhood in Nevada City, California (an hour north of Sacramento), she has since acted on television (“Portlandia”), jabbered with Letterman and Colbert, and both narrated and acted in the Paul Thomas Anderson film, “Inherent Vice.”

More importantly: 20 years in, she has constructed a body of work that bears and rewards consistent attention, which she now has in abundance from a large cohort of ardent followers and approving critics.

Few hard declarative truths in her music. Check that: none at all. That’s not, apparently, and to speak metaphorically, what she has been put on this earth to do.

But she is cool with that. In the closing, much more upbeat, short & sweet song below, she reflects:

Been talking to myself forever, yeah
And how I wish I knew me better, yeah
Still sitting on a shelf and never
Never seen the sun shine brighter
And it feels like me
On a good day

To which one may feel moved to respond with absolute certainty: