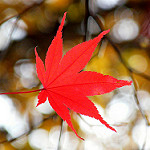 But three months on and with spring winds ahead, keeping the maple swaddled would no longer do. Like a human baby, it had not been able to fend for itself in its new environment, out of the womb of its nursery pot in those first callow days.

Hence the straitjacket, for its own good, serving as hovering parent.

But spring is nearly upon us, and with it, the now-toddler tree’s need to stretch, bend, move, yield, hold, find and test its sea legs against the challenge of the stiff winds to come.

Some hovering still required, in the form of loosely wrapped ribbon from the two stakes now driven into the ground on either side of the tree, supportive sentinels at the ready should an unruly storm kick up a wind beyond its strength to endure.

But make that wrap too tight, and how will it ever develop the strength, the fiber, the rootedness, the adaptability, to endure what nature has in store for it, merciless as we know it to be? 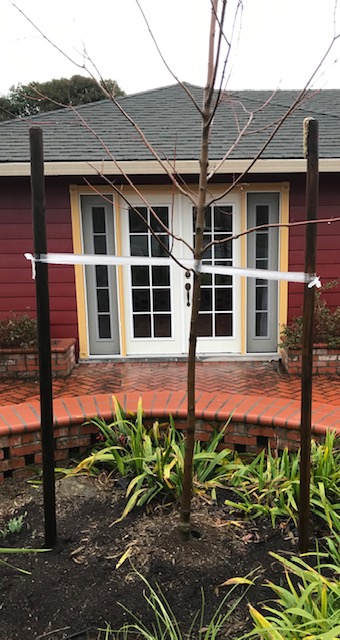 Profound thanks to my dear friend Karen Simmons, whose love of trees surely exceeds mine, and whose generously shared expertise has helped guide me in their care, including the staking described above.

5 comments to Getting Its Sea Legs: On Restaking the Maple Tree