Oh, the Troubles I Seen: A Photo Essay on Labor and Toil

Short of being completely disabled or extremely young or elderly, we must work. From the lowliest worm to the sparrow to kings and queens, we have to get after our daily labor.

In one form or other, we bring the vegetables in from the fields, the meat from the plain, the water from the river, going about our appointed tasks to keep ourselves fed and hydrated.

Call it Darwin’s first imperative: Do what we must do to get food and liquid down our gullets; survive for another day. 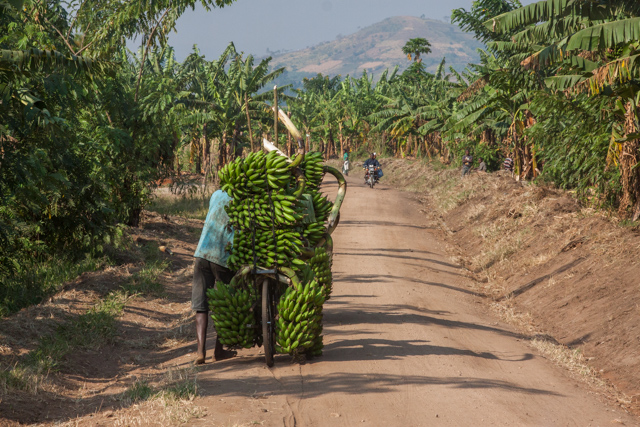 Here in the West, we often conflate work with life itself—as our passion, our very identity, with a not-always-clear demarcation between it and the other forces of family, romance, leisure, recreation that make competing claims on human time and energy (in civilized places, that is, like Canada, or Europe…).

Or we apply the “work ethic” to all of life in vainglorious bromides like the currently fashionable “Work Hard, Play Hard” T-shirts that leave me mentally tired just contemplating them.

Really, folks: can we just, sometimes, call time-out on the constant struggle to excel and muscle ourselves to the front of the damn line in every damn thing? 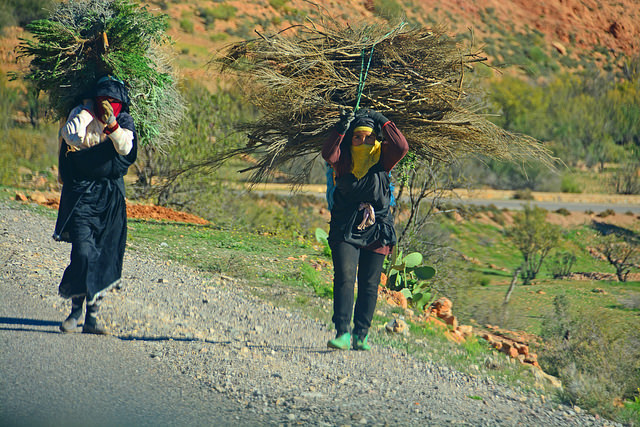 Because the thing is, work as “career,” as identity and meaning-maker and joy-giver and mind-expander, is a kind of privilege unknown to most workers through most of history. Not that there’s anything wrong with careerism; quite the contrary. But we do well to remember it is mostly a function of privilege and education, and that lovely word “choice,” and also, the blind dumb luck of where and when we were born, and to whom. 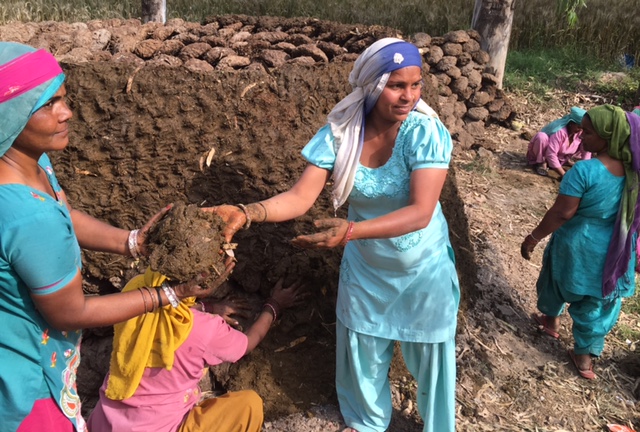 And that in most of the world, work remains hard, and body- and often spirit-breaking, even as it reveals a kind of nobility of hope for a future the worker him- or herself will likely never attain, but whose children may.

That is always the compensation, the parental imperative and burden, is it not? I may not reach the promised land, but I stoop down and toil here for my children…or children’s children.

(The survivalist gene runs deep, and is ultimately oriented toward times distant and unknown…)

In these photographs, we take a brief tour through some of the more hardscrabble places of the world, where work involves a kind of ceaseless toil, often under primitive conditions, against the elements, against prevailing economic conditions, and against the steady deterioration of the main tool that many of these photo subjects use to attain their daily bread: their own fierce, heroic, mostly hardened, but ultimately vulnerable bodies. 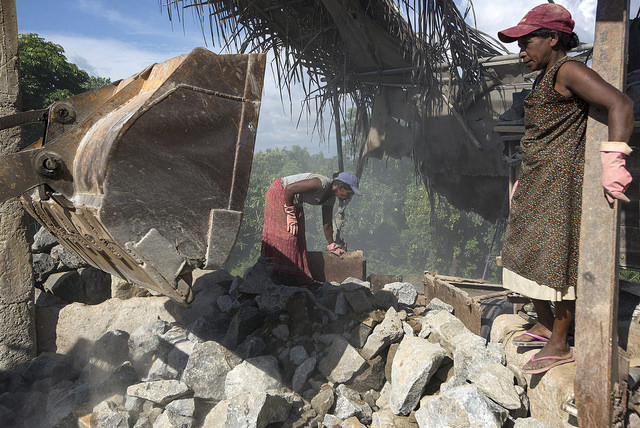 None of this is to romanticize the work pictured here, as if the subjects embodied some notion of the noble, “real,” pre-technological human being. Romanticize, no: I would not wish this kind of hard, sustained, often dangerous work upon myself nor anyone I know.

But one need not romanticize or go soft in the head to recognize the heroism of such commitment, and the nobility of carrying it out, often in intolerable, perilous conditions. 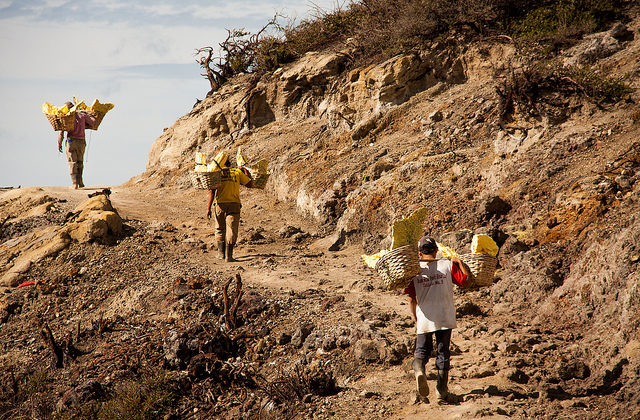 Except these workers do tolerate them, because they seldom have any other choice. Options are few, and hard to come by.  And the fact that their work may help put another few morsels of food in their mouths, or the mouths of their children, is rationale enough, in this world they know all too well, to get up in the morning, and do it again. 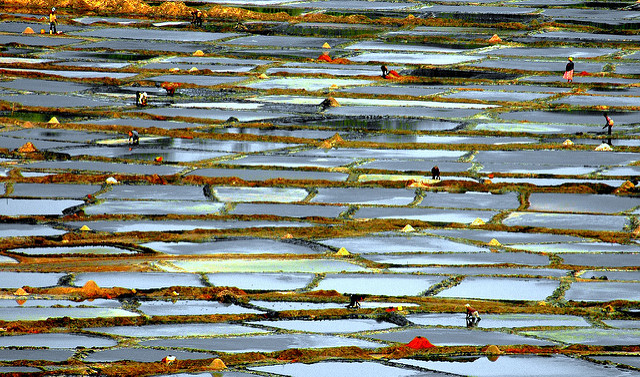 But of course, too often it is the children themselves who toil for their own or their families’ sakes, far be it from them to hold any semblance of a future in their already callused hands as they do the bidding of desperate parents or rapacious overlords, born into the only world they know, their childhoods burned behind them like yesterday’s tilled fields. 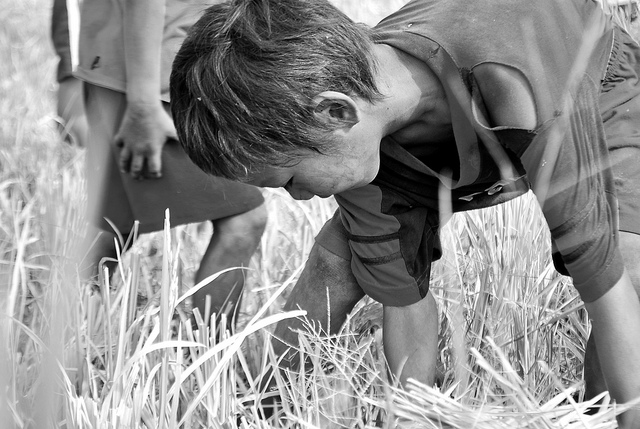 Too long, that some may rest,
Tired millions toil unblest.

That was the English poet William Watson, who straddled the 19th and 20th centuries and wrote those lines in “A New National Anthem.” Would that the world could incorporate such sentiments into “A New INTERnational Anthem,” no longer abiding with such ease the “unblest” masses whose lowly paid toil is seen as their necessary station in life.

“How long, O Lord?” goes the Psalm of David. “Will you forget me forever?” 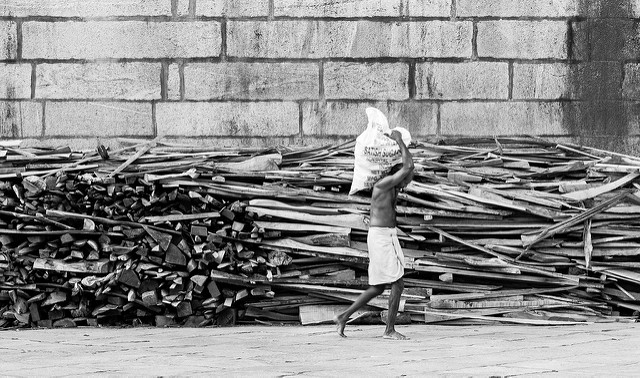 Finally, we need not go to India, Sri Lanka or Uganda to see back-stooping work performed for long days under the sun. In his 1974 master work, “Working,” Studs Terkel wrote, “If I had enough money, I would take busloads of people out to the fields and into the labor camps. Then they’d know how that fine salad got on their table.”

It gets there via the exertions of these people below—and many millions more like them the world over. Let us give a bow of gratitude, recognition and understanding in their direction on this day.

Mahalia Jackson, among others, also does a memorable rendition of this old Negro spiritual, but You Tube was being fickle in not allowing me to load it, for unknown and incomprehensible technical reasons. Ah well:  Paul Robeson’s is quite the classic as well.

Come on, grab your coffee cup and stop by this blog’s public page on Facebook for daily, 1-minute snippets of wisdom and other musings from the world’s great thinkers and artists, accompanied always by the same kind of lovely photography you see here. http://www.facebook.com/TraversingBlog

All other photos via Creative Commons licensing, some rights reserved, see more at photographers’ Flickr sites:

9 comments to Oh, the Troubles I Seen: A Photo Essay on Labor and Toil