Rolling Toward Super Sunday: A Fresh Look At “Rollerball” 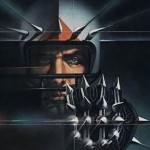 I want to assure returning readers that no, this will not be a blog devoted solely to discussions of violence—it just appears to have insinuated itself as the theme of the week. After all, we’ve got other more uplifting topics to move onto: the devil, the persistence of evil, the unremitting cruelty of nature, and various offshoots therefrom. (Detours into bondage and degradation, perhaps? Naw, no detours into bondage and degradation…)

Joking aside, yes, we will return again here to rhapsodizing on sublime beauty and human goodness—but not before at least a bit more reflection on this rich thread of commentary regarding media violence. Pondering the varied and thoughtful comments on previous posts brought to mind the director Norman Jewison’s 1975 movie, Rollerball, which he adapted from a short story by William Harrison, who also wrote the screenplay. 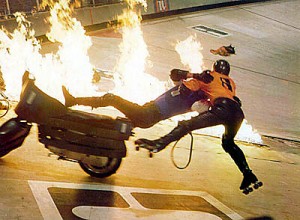 The storyline depicts a violent gladiatorial sport of the future (2018), in which skaters abetted by motorcyclists circle a track and attempt to shove a heavy iron ball into a tube while the opposition employs every means short of murder to prevent it. (As the film draws to a climax, even murder receives official sanction.)

Rollerball is the only sport still allowed in a world where nations have given way to corporations that run the league as a way of conveniently satiating and containing human bloodlust and thus controlling the population. (Hmm, doesn’t sound all that fantastical in 2013, does it?)

Sandy’s comments on fictional heroes in response to the previous post could have been ripped right from the script pages describing “Jonathan E.,” Rollerball’s heroic individual (played by James Caan), the gritty and understated leader of the Houston team. (“The Energy City!” the arena announcer brightly chirps. It’s Houston against hated New York, of course, at the movie’s climax.) 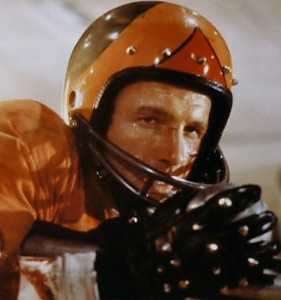 As the plot unfolds, Jonathan pits his will against the soulless corporations running the world and the Rollerball empire. The corporatists are committed to stamping out every last vestige of human individuality. Despite Jonathan’s apparent triumph as the last man alive, Jewison seems to leave the ultimate outcome of his heroic quest in an ambiguous state at movie’s end, available here in a two-minute You Tube clip. (The full length, 125-minute feature can be viewed here.)

Notable for purposes of this discussion is that the sanctioned uber-violence both enthralls and pacifies the population, which is not allowed, and would regardless appear to be uninterested in, sticking its nose into corporate affairs that are best left to the men in tailored suits sitting in the box seats next to the action. How true to current life might this be?

Let’s see: last year’s Super Bowl, the closest we come to an epic gladiatorial event in our culture, set its third consecutive ratings record with an estimated 177 million people watching at least part of the game.

Viewership numbers for the 2012 U.S. presidential election: 66.8 million. Let’s just allow those comparative numbers to sit there and suggest what they will. 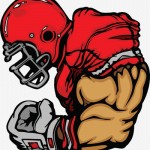 We might also note that the Super Bowl action was punctuated by commercials for which various corporate titans paid some $3.5 million for 30 seconds of air time, and that much of the audience focused as much on the often ingeniously produced commercials as on the game, while sipping the Bud Light and Coke and crunching the Doritos promoted by the sponsors. Ah, the beautiful symmetry of modern life!

If one of the networks, in a “bold and daring ratings move,” were to petition and win approval to conduct fights-to-the-death on prime time network TV, would ratings soar and the arena where the event was held be full?

And so back to the movie. By Rollerball’s end, the combatants are fighting to the death as sanctioned by the corporate sponsors. Could that happen in current human society? We should note Jim’s head-shaking comment on the previous post: that we outlaw dogfighting and cockfighting as beyond the pale in civilized society but gleefully promote the “cage combat” of mixed martial arts with its “unlimited fighting” on network television.

This begets a natural—if uncomfortable—question. If one of the networks, in a “bold and daring ratings move,” were to petition and win approval to conduct fights-to-the-death on prime time network TV, would ratings soar and the arena where the event was held be full? This is perhaps where film violence and even cage combat fans would be put to the ultimate test. Would officially sanctioned games involving actual deaths playing out on TV and the arena cross a definite moral line separating fantasy from reality? Or does that moral line get a bit murky in a continuum from fake mayhem on film to actual deathly mayhem in the arena as the fans roar and the TV audience grabs another Bud Light before settling in for post-battle interviews of the survivors by the attractive sideline reporters?

Gustave LeBon, in his classic little treatise on mob behavior, The Crowd, would no doubt weigh in on those questions were he still alive. But his insights, more than a century after publication, still provide a framework for us to be none too confident in our strategies for maintaining the sometimes thin veneer separating our best civilized selves from the primitive aggressions yet lurking below. Perhaps all of our culturally sanctioned film and sporting violence provides necessary outlets for those aggressions to be tempered and given their due. Let us hope it may at least serve that function. But the boundaries seem permeable and the gladiatorial spirit alive and flourishing. Where exactly do we go from here?

And while we’re pondering that and other points raised by Reservoir Dogs, Rollerball, the Super Bowl and more, would someone please do me the small kindness of passing the chips?

3 comments to Rolling Toward Super Sunday: A Fresh Look At “Rollerball”