1968 Redux? The Moral and Political Case for Non-Violence 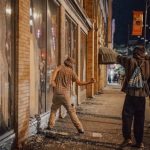 In my fever dreams about November 3, 2020, I see the summer of 1968 having unfolded all over again. Donald Trump, like Richard Nixon then, will have been elected to the presidency (Nixon on his second try, Trump re-elected) by parlaying a summer of urban riots, racial discord and the fear they engendered among threatened white voters to eke out an election victory despite attracting less than a majority of voters, and in Trump’s case, by once again losing the popular vote to his Democratic rival.

This is every Democrat’s and disaffected moderate Republican’s worst nightmare, and it could unfold exactly that way unless Democrats get very strategic, very measured, and very sober—very fast.

Central to that effort will be making their peace with the few hundred thousand swing voters in a few purple states who decided the 2016 election and will very likely do so once again.

And what will making that peace ent...