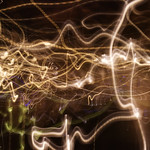 As I turned to see with what sheepish look Bernie would rise to his feet, I saw Mrs...