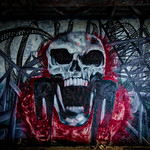 Even South Africa and its brutal apartheid system, which nearly everyone agreed would inevitably require an epic bloodbath to finally root out, managed a peaceful transition to multi-party rule through ...