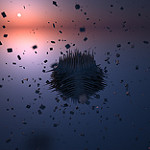 In it, Bloom, a classicist who was admitted to the University of Chicago at age 15 and graduated three years later, excoriated what he saw as the flabbiness of thought, discourse and morality among ‘60s-influenced students and faculty...