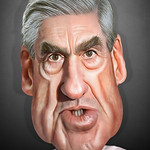 Mueller, just short of 75, looked and sounded somewhat lost a good deal of the time yesterday over a grueling 6-hour stretch as he faced two different committees, half of their members hostile and yelling at him from the get-go, ...