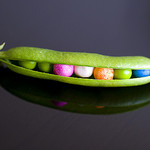 Familiarity also corrodes ignorance, breaks it down, renders it stupid and passé...