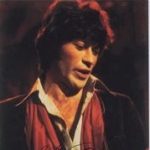 Hawkins had first noticed Robertson playing locally when Hawkins toured in Canada, then invited him to come explore the possibilities of joining up with him in Arkansas. Robertson wound up writing two songs that Hawkins used, launching the teen on a songwriting and guitar-playing mission that has served him well over his subsequent 60-year career...