Notes on That Man-Manly Stoic Thing 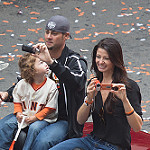 Up until last Thursday night, San Francisco Giants pitcher Ryan Vogelsong had never hit a home run in a major league career that began in 2000 and has included long stints in the minor leagues and in the Japanese professional league. Then in a game against the Colorado Rockies in Denver, Vogelsong launched a ball over the right field fence for the First Home Run of His Major League Career.

That is always a seminal, uniquely gratifying moment in the life of anyone who has ever dared to dream of being a big league ballplayer.

As he circled the bases and began to approach the dugout where his giddy teammates waited for him with high-fives and backslaps at the ready, Giants announcers Mike Krukow and Duane Keiper had the following exchange:

Krukow: Do you think he’ll smile?
Keiper: “No.”
Krukow: “Not even with his first big league home run…Down two runs, he will not smile…