The Winter of Our Discontent tagged posts 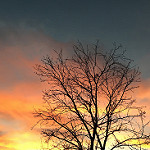