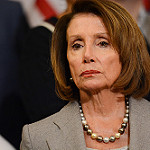 In her interview, she emphasized, in pointed, don’t-mes...