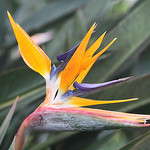 “For all intents and purposes, I am a woman. People look at me differently...