calling off the jam tagged posts

The Vilification of Hillary Clinton 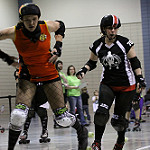 I used to watch Roller Derby when I was a boy. The fastest skaters would race out ahead trying to lap the pack, and if they did, their teammates would work to pick off the opposing skaters with body slams and worse, so that the speedster could pass them and score a point. Pass four skaters, get four points. Meanwhile, if the opposing team’s speedsters were approaching to try scoring some points of their own, the lead skater on your team could pop his or her hands down crisply on their hips and thereby “call off the jam.” This would end that particular play, with all the skaters then cruising a few laps before the referee started the next play.

I’ve found “calling off the jam” a handy metaphor ever since, both for my own private distempers and for larger public activities and conflicts when it struck me that we would all benefit if the main antagonists could only place their hands on their ...