Death of a Salesman as modern allegory tagged posts 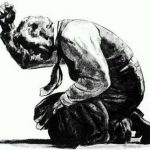 Willy Loman, the beleaguered salesman of the title, lives nearly his entire life as a matter of expediency...