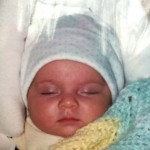 Hiroshima is 16 hours ahead of Pacific Standard Time, so the bomb...