Perfection or Oppression? Chasing Happiness With Epicurus and “The Giver” 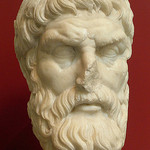 So we heard from Kierkegaard a couple of posts ago, and his prescription for happiness, at least as it existed in his own mind. Kierkegaard largely turned his back on the pleasures and joys of this world (other than philosophy and religion), putting all his faith as well as his formidable intellectual capital into a vision of an afterlife that would ultimately reward the denial or disinterest in pedestrian earthly pleasures.

His philosophy is far more nuanced and rich with rhetoric than that brief summary suggests, but at base, Kierkegaard and a segment of Christianity that has at least partially mirrored his views aren’t overly enamored with this fallen world, regarding it as mere waystation and proving ground for the eternal joy to come.

Google tells me it’s about 1,725 miles from Copenhagen to Athens, but it’s a lot farther than that philosophically from Kierkegaard to another subject of this post, the ...