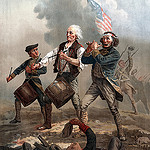 Now: I don’t want to suggest that all is forgotten...