Creative Tension in Leonardo da Vinci, or, Why I Love My Lawn! 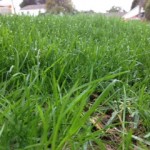 Here in drought-stricken California, we’re being told to let our lawns die. The farmers and the fish need the water, it’s a precious resource, we’ve got to face reality, etc.

After a bone-dry December and January, I was acquiescing, though my lawns, front and back (quite modest-sized, I assure you!) were hunkered down in their winter dormancy and thus not showing any grievous withering face, no brittling yellows that would invite battalions of ever-hearty crab grass and dandelions to mass in preparation for their ultimate invasion and triumph.

Then in February, which effectively brings spring to this Mediterranean climate and would thus reveal the doleful demise of my lawns, the distant sound of cavalry grew suddenly prominent in the form of some nice drenching storms. Not enough to be drought-busters, the newspapers and TV news incessantly reminded us (subtext: “Don’t even think about watering y...