Eighty-five years ago this past week, April 26, 1937, was a market day in Guernica, Spain. It was a Monday, when farmers from the surrounding countryside would bring their crops into the town square to sell to residents and others who flowed in from surrounding towns in the autonomous Basque Country.

The Spanish Civil War was raging at the time, pitting the Republican government against General Francisco Franco’s rebel Nationalist faction and fascist allies Germany and Italy. Guernica, with a population of some 5,000, had not been a center of combat, but it stood some 30 kilometers east of Bilbao, population nearly 200,000, which Franco coveted as a strategically important possession to bring the government to its knees.

Trayvon Martin and the Bitter Legacy of “Strange Fruit” 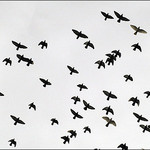 None of us, save for George Zimmerman, will ever know exactly what happened the night he shot and killed Trayvon Martin at close range with a bullet from his 9 millimeter semi-automatic handgun. Reactions to the killing and Zimmerman’s eventual acquittal fell along the usual and predictable faultlines of American life: African-Americans and white liberals decrying the verdict as racially tinged, with most other whites and conservatives pointing to inconclusive evidence in supporting the acquittal.

According to a Pew Research Center poll conducted early this week and cited by NPR, “86 percent of African-Americans expressed dissatisfaction with the verdict, compared with just 30 percent of whites.”

Determining Zimmerman’s legal culpability was a matter for the jurors to decide, and the jurors have spoken...