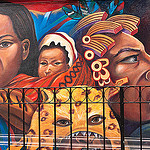 Of course I understood the context out of which this phrase and whatever rally was to take place was drawn...