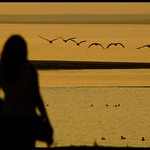 Rexroth was a self-taught intellectual ...