The Epoch of the Disappeared tagged posts 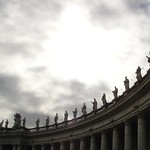