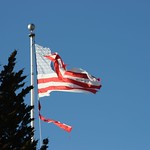 It felt like a violation, as if this throng had entered our own homes, breaking through wind...