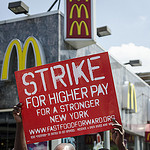 So legions of fast food workers across America are beginning to flex whatever muscle it turns out they might have to ask for $15 an hour, more than double the federal minimum hourly wage of $7.25 and almost $6 an hour more than the industry’s current average salary of $9.03 an hour. Predictably, industry officials are howling, claiming how bad for the workers this would actually be, leading to higher prices when they buy food, shuttered restaurants, lost jobs, and other economic calamities.

Funny how executive pay and benefits increases—not to mention stock options and multi-million dollar bonuses—never seem to have the same effect. Executives buying more (tax-deductible) corporate jets and yachts stimulate the economy and help create jobs! jobs! jobs!, but them paying their workers enough so workers can pay their own rent, buy food without government assistance, and maybe take the kids to a movie on weekends somehow shoots the entire economy all to hell.

San Francisco has raised its minimum wage for businesses within the city steadily since a 2003 ballot initiative pegged it to the annual inflation rate. The $8.50 an hour mandated in 2004 rose to $10.55 at the start off 2013—the highest in the nation. The business community has warned of dark consequences with each raise, as it always does, whenever and wherever minimum wages are even discussed. Unfortunately for these business doomsayers, The City continues to thrive as an economic and cultural center despite the supposedly crippling salaries going to the likes of its fast food workers and store clerks. 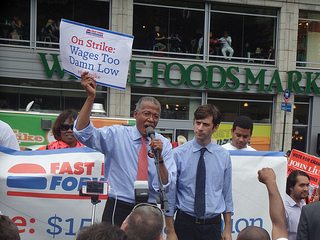 This issue has deep reverberations in these economic times, when the income disparity between the rich and poor is at record levels, and each day bumps more formerly middle class people down another rung on the economic ladder. We are living in a veritable gilded age, and one paragraph from Wikipedia—buttressed by anecdotal evidence you can get by taking a nice long walk around virtually any city in America this very day—tells the tale:

I’ll leave it to policy wonks to discuss solutions to this dismal state of affairs, because my concern here is more fundamental—moral rather than economic (though the two are certainly tied together). Or rather: the essential amorality of industrial capitalism’s basic approach to wages, which asks the wrong question in determining what it will pay employees.

Is it possible to get some consensus in this advanced economy and ostensibly enlightened society that no person who is employed full-time should be below the poverty line?

The prevailing question in what is regarded and even romanticized as a relentlessly competitive, cut-throat economy is, “What is the least possible sum I can pay this person?” Lowest expenses, highest profits—that’s the formula, and capitalism sticks by it always. It’s considered basic business strategy, just “the way things are.”

But from a moral perspective, or what we might call “capitalism with a human face,” a term coined by economic journalist Samuel Brittan in a 1996 book by the same name, it is the wrong question. The right question is not, “How low can I grind this person down?” but instead: “What is this person worth?”

A couple of other ways of asking and reinforcing this: “What value does this person bring to my enterprise? How much of my own profit and wealth is it right and proper for me to share with her?”

And a variation on that last question: “How greedy is it permissible for me to be in hoarding as much wealth as possible while my employees live below the poverty line?”

The fast food industry is hardly alone in its irresponsible, unlivable wage structure. An even handier example for our purposes is the modern supercenter, of which the poster child for rapacious wages is Walmart and its $8.81 average salary. Notoriously, Walmart employees often rely on government assistance for food, health and dental care, effectively fobbing off on taxpayers the costs for these basic human services.

Yes, dear working taxpayer: you are paying for many Walmart employees’ doctor visits so that the Walton family doesn’t have to. Courtesy of Forbes magazine, I list below the family members who own chunks of the company, along with their net worth, precious little of which is going to pay benefits or even a living wage to their employees:

That’s $119.2 billion total, with the top four family members all landing between Nos. 11-20 on Forbes’ list of the wealthiest people in the world.

And their employees make an average eight dollars and eighty-one cents an hour.

That’s $15,576 annually, based upon Walmart’s practice of limiting full-time workers to 34 hours a week. (Most fast food workers work even less, an average of 24 hours.)

Speaking of lists, greed occupies the No. 3 spot on the list of the Seven Deadly Sins that have long helped form Christian ethics. (Its partners in dubious conduct are wrath, sloth, pride, lust, envy and gluttony.) The question one must ask, of course, is, “What is greed?” Here’s a possible criterion: A family that keeps $119.2 billion to itself while the bulk of its employees earn salaries below the poverty line and receive taxpayer support to put food on their tables.

And another: a corporation (McDonald’s) that made $5.5 billion profit last year alone, while its workers earn below the poverty line.

A frequent objection to the grim numbers cited here is that most fast food workers and many store clerks are students working their way through school rather than trying to support families. But a report by the Economic Policies Institute cited in the Los Angeles Times last week “shows that the average age of minimum-wage workers is now 35, and that 88% are 20 and older.”

Is it possible to get some consensus in this advanced economy and ostensibly enlightened society that no person who is employed full-time should be below the poverty line? That they should always be paid well enough to stay off food stamps? That the term “working poor” should be forever rendered oxymoronic? How can we allow the current state of affairs to continue, and for how long?

I am aware that the Walton family has two different charitable foundations which do many good works. But with $119.2 billion at their disposal, might their refusal to pay employees a living wage be a case of robbing Peter to give to Paul—and then getting additional tax breaks and accolades for doing so?

It was said that patriarch Sam Walton was Presbyterian and the family was raised in that tradition. Little is known about individual family members’ religious lives, but it is difficult to imagine them reading much if any of the gospels without being struck blind and deaf by the persistent entreaties to share the wealth one has, to feed and clothe the poor. Ironically and most pointedly, the “poor” would include their very own employees, who have “earned” the descriptor of being among the “working poor” by virtue of their employment by one of the wealthiest corporations in world history.

And let’s toss maid work into that equation, and supercenter work, and caregiver work, and janitorial work, and fruitpicker work, and pizza delivery work, and landscaping work. Any and all kinds of work, work that by its very definition should be held to basic standards of human dignity and respect, which compel us to pay no less than what these finally unmuzzled toiling masses are rightfully asking for—and to be glad for the opportunity.
***

Much appreciation to the photographers whose work graces this site: Rotating banner photos top of page courtesy of Elizabeth Haslam, some rights reserved under Creative Commons licensing, see more at: https://www.flickr.com/photos/lizhaslam/

Small photo in front of McDonalds near top of page courtesy of mtume_soul, some rights reserved under Creative Commons licensing, see more @ http://www.flickr.com/photos/mtumesoul/.

And finally, a crucial question from Pete Seeger:
http://www.youtube.com/watch?v=msEYGql0drc