A Deep Ache of Laughter: On the Razor’s Edge With Loudon Wainwright 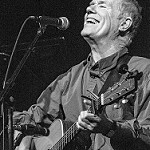 One of the widely regarded hallmarks of great art is that it be honest and authentic, a true expression of the artist’s unique vision. The best art probes, focuses, explores, suggests, reveals. Sometimes that exploration and self-revelation plunges the artist too near scalding depths of pain and suffering, and the laying bare becomes too intense. The solace of drink, drugs, and the ultimate self-destructive behavior of suicide may then beckon.  (Van Gogh, Rothko, Hemingway, Plath, Woolf, Sexton, Morrison, Joplin, Cobain, Robin Williams; it’s a long casualty list.)

Among contemporary artists in whatever genre, probably none explore their demons with quite the unflinching, ruthless honesty of singer-songwriter Loudon Wainwright III. (Those roman numerals loom large in his history; more on that below.)

From down here in the audience, it doesn’t look easy being Wainwright, whom I saw from two rows back two nights ago in Napa. Which is not to say the man doesn’t present an often mirthful persona, his eyes twinkling and bathed in merriment, pursing his lips and grimacing in mock anguish, slashing theatrically at his guitar while bemoaning the grayings and saggings of advancing age that he proclaims in “Double Lifetime”:

That’s the almost manic Wainwright, grinning broadly, flashing maximum teeth, kicking up first one leg then another as he leans hard into a riotous lyrical riff, like the one with which he made something of a name for himself back in 1972, his only song ever to hit the charts, one he admits to writing in 15 minutes and still seems almost embarrassed to claim as his:

You got yer
Dead skunk in the middle of the road…

But Loudon Wainwright did not come into this world merely to make us or himself laugh. It’s true he has never stopped imbuing his music and live shows with generous heaps of humor, but hard up against it are moments of such intense self-scrutiny, such acute observations on his fractured relationships, his failings as a husband, a father, a son, as to strike an audience teary and dumb.

Nowhere can one find a more potent example of the razor’s edge between humor and pathos, the tragic and the giggly.

On the pathos end of that razor, it is like watching a man open a vein and bleed all over his guitar while continuing to strum and grimace, more from the pain of the memory he is reliving rather than the wound.

That pain includes Wainwright laying out his dead-honest culpability for inflicting violence upon his innocent child in the haunting, “Hitting You,” about striking his daughter Martha. Nothing escapes either protagonist in this primordial drama of power exertion, at the bottom of which lies the awful specter of annihilation.

The father knows the tide has now turned forevermore as even in his rage his acute sensitivity notes the quickening sequence of shock, pain, fear, anger and finally defiant pride emanating from his young daughter.

There will be a reckoning for this moment, and it will last for a very long time.

Long ago I hit you, we were in the car
You were crazy in the back seat, it had gone too far
And I pulled the auto over and I hit you with all my might
I knew right away it was too hard and I’d never make it right…

Martha, like her better-known brother Rufus, has since gone on to carve out her own songwriting career that includes perhaps the world’s most unequivocally hostile title: “Bloody Mother Fucking Asshole.”

Yes, the reference is to her father, whom she has eviscerated in interviews as “writing songs about his family rather than tending to them.” It’s a sentiment that has had her father, notably, nodding in agreement, as he told Vanity Fair magazine in a 2007 profile brilliantly headlined: “Songs in the Key of Lacerating”:

“Family life is tough, I’ll say that for it. But in my case I’ve mined the family. In a sense, I’ve used it. I’ve used what happened—the different events, the births of children, birthdays. Connecting, not connecting. Regret, shame, guilt. I mean, they’re all in the songs. And love, too, I hasten to add.”

The love has seemed to manage to continue bobbing above the surface as Loudon, Rufus and Martha have since collaborated on various projects despite lingering recriminations that inevitably find their way into a song by one or another of them. But it’s never easy. 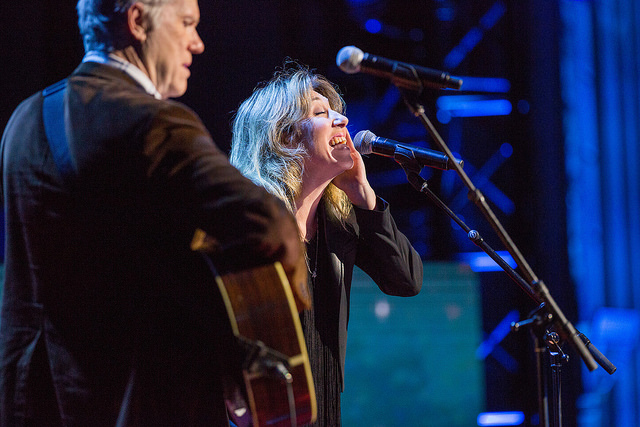 Loudon sharing the stage with Martha at a TED conference in 2015.

Wainwright’s plaintive reflections below are from “Father and Son,”  written when Rufus was a teenager. In it, Wainwright explores generativity and the bequeathal, from one generation to the next, not of physical traits, but of the haunting failures of communication, the restraints of emotional expression, which weigh most prevalently on males and prevent them, himself very much included, from coming into full loving relationships.

When I was your age I was just like you,
And just look at me now; I’m sure you do.
But your grandfather was just as bad
And you should have heard him trash his dad.

Life’s no picnic, that’s a given:
My mom’s mom died when my mom was seven;
My mom’s father was a tragic guy,
But he was so distant and nobody knows why…

I don’t know what all of this fighting is for;
But we’re having us a teenage/middle-age war.
I don’t want to die and you want to live;
It takes a little bit of take and a whole lot of give.
It never really ends though each race is run,
This thing between a father and a son.

Loudon Wainwright II had perhaps a bigger ongoing audience than his son has enjoyed.
The II was a regular columnist for Life magazine when it was a ubiquitous presence on American coffee tables. He penned “The View From Here” from 1964 until the magazine folded in 1972, later returning as an editor when the magazine revived as a monthly in 1978.

He was, by all accounts, a fine writer and a distant presence in his children’s lives. In many self-acknowledged ways, his son has spent the better part of his own life sorting through the consequences of that distance, as one sees in both the stanzas above and these that follow:

When I was your age I thought I hated my dad
And that the feeling was a mutual one that we had;
We fought each other day and night:
I was always wrong; he was always right.

But he had the power and he needed to win;
His life half over, mine about to begin.
I’m not sure about that Oedipal stuff,
But when we were together it was always rough.

The whole song is here below, rendered nicely on the TV show “Austin City Limits” in 1998. Gripping in its full-bore intensity, it is followed, as both relief and prime example of Wainwright’s playful deadpan side, with observations on the infant Rufus falling in love with his mother’s breasts, the same ones his father covets in probably the original Oedipal drama, rendered humorously in “Rufus Is a Tit Man.”

So put Rufus on the left one
And put me right on the right
And like Romulus and Remus
We’ll suck all night.

Not long after that joyful little detour into domestic bliss comes another disarming event, which Wainwright chronicles in the same straight-ahead fashion with which he approaches all his song lyrics, telling it like it is in equal parts plain-spoken honesty and self-reproach.

The end of Wainwright’s five-year marriage to Canadian folksinger Kate McGarrigle came when Rufus was 3 years old and Martha just 3 months. One of Rufus’s earliest memories is of the family dining room table being loaded into a moving van as he and his sister leave with their mother, headed for Kate’s home country solace in Montreal.

Your mother and I are living apart
I know that seems stupid, but we weren’t very smart
You’ll stay with her, I’ll visit you
At Christmas, on weekends, the summertime too

Your mother and I are not getting along
Somehow somewhere something went wrong
Everything changes, time takes its toll
Your folks fell in love, love’s a very deep hole

Kate died in 2010 at age 63 after a long battle with cancer. But not before her own impressive body of work that included songs such as “Go Leave” (directed at Loudon) and then a beckoning back to him in “Blues in D.”

“If there’s a rule in the Wainwright-McGarrigle family, it’s that the skillful musical expression of a heartfelt emotion outweighs any hurt or discomfort it may cause. What would be offensive, in their view, would be to write a crummy song.”

A 2012 “Interview” magazine piece with Martha suggests this remarkably tempestuous (though creative) mining of family relationships for the sake of art. Is it even decent to subject your family members to the working out of the inevitable conflicts that beset every member of every all-too-human family?

In the case of artists, it seems the question answers itself with the arrival of each new song, poem or story. Emotional honesty, bordering all the while on unseemly self-indulgence at your loved ones’ expense, rules every day. That is but one challenge confronting every artist who deigns to say anything for public consumption.

BRADY: I had to ask the token family question. I mean, people are fascinated by your family.

WAINWRIGHT: People are always talking about “our fucking family.” So, [my dad] goes on and on and so I told him, “Well, you’re the one who’s been writing songs about your family for 35 years and you keep singing them! You are demanding that people ask you these questions.”

BRADY: This is true.

WAINWRIGHT: I guess he just wishes that art were just judged as art. I mean, that’s just not the way it works, though.

Indeed it doesn’t. The intertwining of life and art in the psyche of artists can produce powerful works. But it is messy at best, downright destructive at worst. And here’s the bitch of it: it is actually like that for every one of us, however artistically inclined we are.

Ultimately, we all live and die as but half-formed souls, trying to make sense of our lives, our families, our place within them, our place within this often impenetrable universe. And the tools with which we are equipped to try slaying that dragon?

Alas, only the messy entanglements of emotion and reason that doom us never to get it exactly right.

But it is just as true that the effort can be pure, and it can pay handsome dividends, however much conflict we endure for the striving.

Artists along the lines of Loudon Wainwright and his brood show us a way of facing those conflicts and owning up to our role in them, all the while hoping for the touch of grace and redemption that can proclaim it, in some ultimate sense, as worthwhile.

6 comments to A Deep Ache of Laughter: On the Razor’s Edge With Loudon Wainwright