A Meditation on Thinking 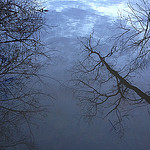 What could I have been thinking? It’s a question we ask ourselves with regularity when we have acted like dunderheads, making some half-baked decision on a purchase or a course of action, a relationship, a career move or a business deal. It can apply when we have done something we shouldn’t have or not done something we should have, and it can always apply—probably more easily, given how we’d rather point the finger outward than at ourselves—to others.

What were they thinking? (Bush and Cheney invading Iraq, Clinton with Monica, every person who consents to being grilled on 60 Minutes, all karaoke singers everywhere…)

It’s a beautiful question, so aptly and succinctly does it frame, with a dose of sardonic humor, the human tendency to act really, really stupidly on occasion. And no one is immune.

Shrewd and worldly, lowly and dim, middle class midwest or upper class upper east side: you’d need to live 24/7 in a high-tech, hermetically sealed straitjacket with tubes running to and from your critical orifices to avoid doing some of the dumb things that humans do. And if you accomplished that, I would ask you: “You decided to live in a straitjacket? What were you thinking??”

It’s burdensome, this non-stop firing of our circuitry, and failing to get on top of it results not in an absence of thinking but rather, in too much competition for our thoughts.

“To err is human,” said Alexander Pope, and let’s never mind that part about forgiveness being divine.  (A fun twist on that maxim by Hubert Humphrey: “To err is human. To blame someone else is politics.”) Most great literature explores this erring, usually amidst a conflict pitting humans vs. some nature or other—their own, the nature of another person, or nature at large in an often forbidding environment.

A friend volunteers with a coastal fire department to photograph rescue operations of fallen cliff-side hikers or abalone divers who wade into treacherous waters. ”Rescue” frequently turns to mere recovery as lifeless bodies are hauled up from the surf.

The divers tend to be successful, educated people who can afford the equipment and time away to go pry abalone from rocks off a very forbidding and distant coast. Signs writ large about the dangers and inadvisability of entering the water in turbid conditions greet them at every turn. And in they plunge anyway, in a kind of well-heeled march of the penguins, blithe and blind to all the warnings on signs, deaf to the voluminous stories of lost lives and loves left behind. It occurs with depressing regularity as the photos get archived on my friend’s hard drive. What were they thinking? 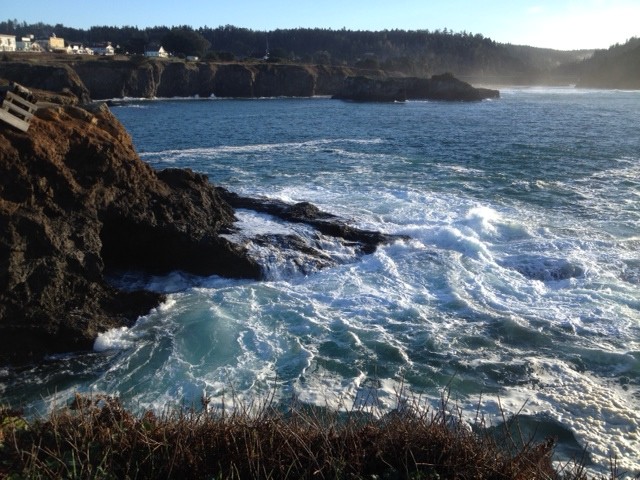 When you really think hard about what you’re thinking, you realize that most of the time, the problem and the burden is not that we’re not thinking, but that we’re thinking too much. Our consciousness tends to be crowded with all manner of inputs, a thousand different thoughts and impressions, projections and fantasies, fears and observations cascading through our brains like a snowball  thrown hard against a wall and splattering—followed by others in very rapid and relentless succession.

This goes on most all the time, in a remarkable high-wire act that can take its toll if we don’t seek occasional refuge in the stillness of solitude, whether under our blankets late on Saturday morning or out on the night streets gazing idly into windows or up at the moon.

It’s burdensome, this non-stop firing of our circuitry, and failing to get on top of it results not in an absence of thinking but rather, in too much competition for our thoughts, as we suffer the very loss of focus and common sense suggested by the question, “What was he thinking?” 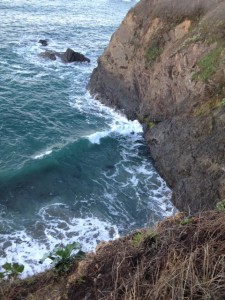 I was once having a deep and intense conversation with a friend while driving in the midst of a bad traffic jam, subtly and instantaneously negotiating one sticky crowded point of the physical world after another while utterly absorbed in the delicious but demanding byplay of two minds grappling purely with the higher order world of ideas. I suddenly realized two things: 1) How amazing it was that I could pull this off—We humans are a piece of work, aren’t we?, and 2)  I had reached a point where the situation demanded too much of me, given the cumulative mental impacts of the traffic and the conversation.

So that’s the other side of the “What was I thinking?” coin. The situation demanded too much thinking, and then additional clear thinking to make a sober assessment that it should not continue.

Let’s not think anymore for the moment; now THERE’S some good thinking!

That, essentially, is what we do in adopting any purposeful meditation discipline, whether sitting zazen, clutching a rosary, rolling out our yoga mat, or lacing up our shoes for a punctual morning walk or run. Be still, mind! Let’s give ourselves a rest now! 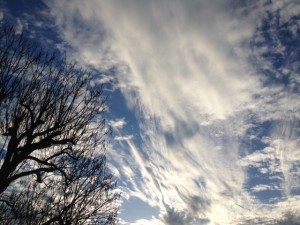 Until we become very accomplished, we don’t necessarily quell the monkeymind as much as just observe and let it be, and then, over a long, long time, imbued with habit and intention to attention, in its own developing quietude and at its own pace, it begins to still itself.

But meditation, like an intense focused conversation, is a higher-order thinking activity with an ironic twist, involving as it does extremely focused thinking about not thinking.

And what about impinged minds, those beset by mental illness or birth defect, accident or medical event? What are they thinking? It is not, generally and unfortunately, something you can ask them in expectation of a response.

Back in my special education teaching days, I worked initially with a group of older kids, generally slow on the uptake, content to sit on couches all day if we let them, quietly rocking and awaiting the trudge down the hall to their next meal. We regularly intruded on their calm with one activity to the next:  “Get out those puzzles, Laura, come on Sherri, up up up on that balance beam!”

Then I got switched to a class of younger, more active kids, and one day in came a boy named Mark Miller, diagnosed with a then-somewhat-obscure condition known as autism. No slow rocking and awaiting the next trudge down the hall for Mark. He was more like a dart, zipping through time and space in quick bursts until something, either internal from who-knows-where in his own circuitry or external from me, his teacher, stopped him suddenly short. At which time he would rock quickly in staccato rhythm while twirling two fingers at cheek-level, accompanied by the recurrent expression, “Ta dum…ta dum…”

On his face, a furrowed look of worry.

Mark caused me to hit the bookstore and buy everything I could find on autism, which at the time was largely understood in psychoanalytic terms, with issues of attachment to the mother and other factors mentioned prominently in speculation on its etiology. I say “speculation” because no one really knew what caused it or what, if anything, could fix or at least help improve it, even as behaviorists, geneticists, neurobiologists and others came to have their say on the matter, which remains unresolved today.

All I knew at the time was that Mark was much more fascinating and challenging for me than were most of the other kids in my classes. I devoted a huge amount of my emotional reserves trying to crawl inside his psyche, wondering all the while, “What is he thinking? What could he possibly be thinking?”

In my own thinking about that question today, I still find much of the same mystery that underlaid my speculations on Mark 40 years ago. We know so much—and we know so little still—about the psyche, no matter how much wiring and picture-taking we have developed in mapping the brain’s pleasure and information processing and long-term memory centers, et al.

I developed what I considered to be a close relationship with Mark. He came to trust me enough to engage in regular jousting as I turned him upside down or played peek-a-boo and the usual other things one can do with kids to elicit their delighted squeals. Sometimes, he would come to rest in my lap, slowing down his rocking, his “ta dum” in recession, the rat-a-tat of his darting brain seemingly slowed. “What is he thinking now?” I would wonder.

Perhaps his thinking for the moment had come mercifully to a halt, released, as we all need release, from the intensity of lived experience in conscious brains that are sometimes overwhelmed with everything that our world, both inner and outer, presents to us.

In Mark’s case, in Mark’s brain, it seemed that “overwhelmed” was more or less a permanent condition, and the only way for him to manage it effectively over the long term was to dart hither and yon, rock when slowed, and quell the roiling waters of his own dangerous seas with a magic two syllables of rescue: “Ta dum…ta dum…” 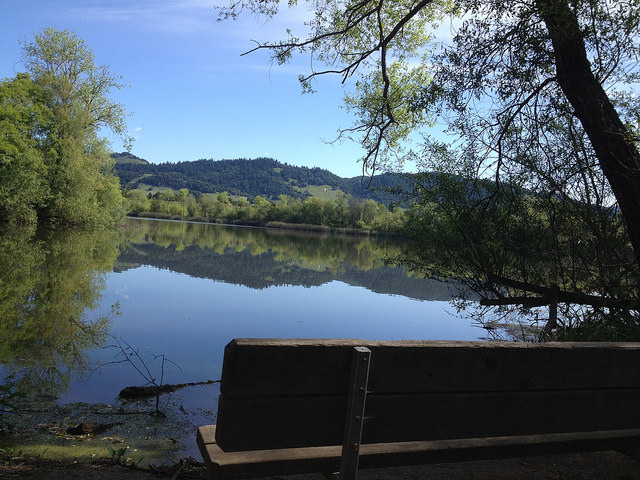 Up for a brief thought every day or two from the world’s great thinkers and artists, accompanied by the same kind of photography you see here? Then check my public Facebook page  at: http://www.facebook.com/TraversingBlog

Much appreciation to photographer Elizabeth Haslam, whose shots grace the rotating banner at the top of this page. Some rights reserved under Creative Commons licensing, see more at: https://www.flickr.com/photos/lizhaslam/

All other photos by Andrew Hidas, some rights reserved under Creative Commons licensing, see more at: https://www.flickr.com/photos/93289242@N07/

4 comments to A Meditation on Thinking