A Music All Their Own: A Punch Brothers Appreciation 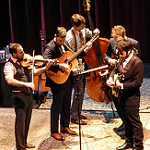 And then there are the Punch Brothers.

Oh sure, their foundation, as it were, may be in bluegrass, usually with a “progressive” fronting it, and it’s a handy enough label when looking at their classic bluegrassian instruments: mandolin, guitar, banjo, bass, fiddle.

And while bluegrass is a perfectly fine genre, the Punch Brothers bust through that label early and often in their concerts and albums, with all the ease of schoolboy football players tearing through those paper barriers that purport to separate their locker room from the field under Friday night lights.

Perhaps you have heard or seen them, or at least heard of them? If not, let this post serve as an introduction to what in my estimation is an altogether singular musical experience, unlike most any other you’re likely to encounter in your life.

A taste of that here, if you’d like, or else you can loop back later and sample the music in one swoop. Your choice!

***
First, the sheer talent of the players, oh my word!

Actually, don’t take my word for it, because among the musical literati that includes scores of critics and some pretty knowledgable musicial friends of my own, there is almost universal acclaim for the sheer technical skill of these still young (mid-30s-ish) men.

But the virtuostic individual skill set isn’t necessarily the thing.

Nor are the group’s lyrics—cooperative projects involving and credited to them all—the thing, though the lyrics are literate, intriguing, sometimes opaque but not impenetrable.

(Given my aging ears along with the group’s lush, intensely rhythmic instrumentation [without drums!], and lead singer/mandolinist Chris Thile’s sometimes breathy, bordering-on-falsetto delivery, figuring out lyrics in the listening can be a fool’s errand, but reading them very much serves as its own reward.)

Nor does the group produce all that many particularly memorable melodic riffs that have you humming snippets of one song or other as you leave the concert hall.

But oh, the compelling, complex, and ever surprising sounds they make together.

The conversation between their instruments.

The sheer immersion, the joy, and what I would describe as the sacred wonder of their music-making, live, in the moment, five human beings speaking and exulting in an entirely different language that at their rarefied level, only they truly understand and anticipate. All of it in a public conversation they are having on stage, the irony being that it feels uncannily cloistered at the same time.

Here, try another, a little Debussyian impressionism for your Saturday.

It’s a standard gambit of musical acts to have a kind of dueling guitars segment wherein two players will wail away in turn, topping each other in a good-natured, mock “competition” that invariably delights audiences.

There’s not the least bit wrong with that, and although the Punch Brothers regularly turn physically toward each other and tend to hover in much tighter proximity than most other bands (as in the performance above), there is never the slightest whiff of “competition,”  feigned or not, when two or more of them move so close together that their instruments almost kiss.

What’s going on with the Punch Brothers at those moments is not competition, but communion—a deeply collaborative musical odyssey that undergirds each song, each phrase that builds upon itself and the responses it engenders from the other band members.

The effect is hypnotic, because as the audience, we feel let in on something reverent and profound. Sure, the artists are there to entertain and make a living, but music-making at this level, with its fidelity to something far larger than the skill of the individual players, transports an audience to a state of hushed rapture, almost slack-jawed at the combination of technical virtuosity, creativity, and sheer musical communication it is witnessing on stage.

And I daresay, it also transports the players, their tight focus on each other’s playing as well as their own showing through in every ear-cocked gaze.

Oh, but are they having a fine time up there!

So did I on Thursday night on the lawn at Sonoma State University, where the Brothers—none of them related by blood—held forth for a couple of hours from the stately symphony hall, whose doors conveniently open for lawn seating and picnicking on a summer’s eve. It was the second time I’ve seen them, and like their own multi-layered musical textures, the experience built winningly upon itself from the first time.

The gods willing for the band and for me, there will be many more such shows for both of us.

This thoroughly delightful performance was for the benefit of Bedstock, a “one-of-a-kind, online music festival where artists play from bed for sick kids stuck in theirs.” One gets the sense some clever promoter could corral the band into a slightly oversized bathtub and the music would come out just as impeccable as ever.

15 comments to A Music All Their Own: A Punch Brothers Appreciation