A Scientific Nincompoop’s Musings on the “God Particle” 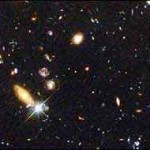 So we have a new pope one day, and the next day, an updated and near certain confirmation of the Higgs boson, known in the popular press as the “God particle,” the tinier-than-tiny sub-atomic thingamajig that physicists have concluded gives matter its mass. (“What gives matter its mass?” perfectly exemplifies the kinds of questions a scientist would ask, no? The “social” science equivalent: “Why are people the way they are?” Physicists know better than to go anywhere near that question…)

As a long-lapsed Catholic, who, like most exes, maintains a complicated relationship with the Mother Church, I have watched with no small dismay as the last two popes have been industriously rolling back the radical—and ever-so-necessary—reforms of the 1950s Vatican II conclave that attempted to hoist the church and its many unfilled tasks into the 20th century, not to mention the 21st. Sadly, Popes John Paul II and Benedict have been remarkably “successful” in that effort. 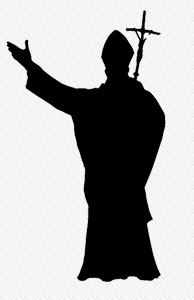 Hostility to the very ideas of contraception, female clergy, a married priesthood, and the full humanity of gay people is simply not a serious response to the pressing issues of our world; it almost begs for ridicule and outright dismissal (along the lines of unwanted attention from Saturday Night Live). And to listen to the new pope on these matters is to hold out little hope that the institutional church’s determined push back to the 14th century will abate any time soon.

Meanwhile, the astonishing, mind-bending progress in understanding the very basis of life, the “stuff” that makes all the other “stuff” of our entire universe possible, continues in modern science, where there is no pope or elderly, insular core of cardinals who decree a sustained flight back to pre-copernican times. Science instead employs a (sometimes ferocious) set of objective standards for the seeking, accrual, and defense of knowledge, with every advance subject to relentless scrutiny and challenge rather than decree. So goes the step-by-step eking out of hard-won scientific understanding regarding our world and the cosmos beyond.

And where has this latest advance in our knowledge gotten us? To the prospect that our universe, all this matter that matters so greatly to us as we go about our daily tasks of working, eating, drinking, and, in my case at least, worrying about the Giants’ relief pitching corps, is doomed.

The scientists at CERN, the huge lab for particle physics research on the French-Swiss border, have been banging trillions of particles into each other for years and then observing what happens to them. Their findings have suggested that the universe itself—not just our beloved country or planet or solar system, but the whole enchilada of billions of planets and galaxies stretching to what we would think to be infinity—is getting sucked back into itself and will one day collapse and become nothing. 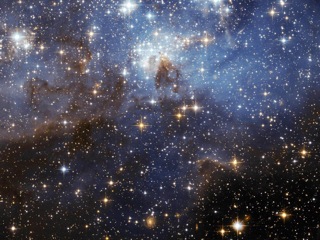 Not simply black endless space, not an anti-thing alongside a thing, but nothing. No thing.

Our nada who art in nada, to quote Hemingway, a writer who knew a thing or two about things.

I’m trying to imagine that, but I’m having a hard time. The mind reels.

True, that state of “no-thing-ness” looks like it will take a while to arrive. Current calculations show the date of Universe Collapse to be an estimated 10100 years from now, meaning, 1 followed by 100-zeros years. Happily, Rev. Pat Robertson has at least told us the date: October 31. (That’s a joke, yes.)

Still, the prospect of a here-today, gone-after-many-tomorrows universe is a sobering thought, even if the prospect of it being billions of years from now allows us a certain devil-may-care jocularity. Leibniz’s philosophical question, “Why is there something rather than nothing?” would, interestingly enough, become passé once the universe ends and there is no thing left—nor any philosopher to ponder it.

Let us invite a small tentative drum roll here for…the “multi-verse!” Yes, at least some physicists have floated the idea that other universes beyond this universe may exist, may not themselves be doomed in the same way this one is…

The prospect of the universe’s ending recapitulates, on a cosmic scale, our knowledge that we will ourselves cease to be someday. Unfortunately, that day will arrive quite a bit before another 10100 years have passed. Facing the prospect of our flesh and our thoughts becoming “no thing,” human beings have used their seemingly limitless imaginative power (and where did that come from?) to conjure dazzling stories and elaborate theological edifices of gods who set the entire enterprise in motion, sometimes for their amusement, other times for love and even companionship.

Most all these stories posit a thinking, feeling, loving, sometimes angry parent figure of some sort, a kind of Super Pope with unlimited magical creative powers who tends to our temporal needs— though sometimes, for mysterious reasons, chooses not to—and offers us the reward of eternal life if we behave well. Almost from the dawn of civilization, that promise has been enough to temper the fear of death among religious believers.

But the death of the universe itself? If the physicists are right, and not only this fragile planet but everything—every thing!—beyond it is ultimately destined for oblivion, then…then…then…I dunno.

I don’t know, can’t conjure or imagine, can’t fathom, the end of that sentence above. Then what?

Wait! Let us invite a small tentative drum roll here for…the “multi-verse!” Yes, at least some physicists have floated the idea that other universes beyond this universe may exist, may not themselves be doomed in the same way this one is, because they may be subject to different physical laws. Hope springs eternal!

I don’t think I’ll be reserving my ticket on the spaceship heading for the Multi-Verse Docking Station anytime soon, though. But I will be paying my taxes, just as Gian Guidice has advised. Matter of fact, I’m due to have receipts and reports spread out over the kitchen table all weekend long here. Maybe I’ll reward myself with a “Death & Taxes” beer from the Moonlight Brewing Company.

Finally, for full disclosure: I have a brilliant nephew who works as a physicist at CERN, and of whom I am both extraordinarily proud and puzzled, the puzzled part being: How could I, someone who assiduously avoided high school chemistry and all math classes beyond the absolute minimum requirement of 10th grade geometry, possibly share a genetic profile with someone whose head is constantly peering into impossibly tiny bits of matter and applying impossibly long mathematical formulas to try to figure out what the heck is going on? Another question to ponder over a very black beer…