Amy Winehouse’s Cry From the Depths of Creation 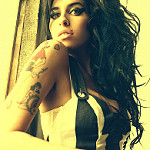 At one point in the current documentary (Amy) of the gifted and tortured singer Amy Winehouse, she was so deeply submerged in her partly guttural/feral, partly ravishing/seductive treatment of a song, digging into it with such resonant and startling ferocity, that I exclaimed to myself there in the dark of the theater, “My God, that voice is from the depths of creation!”

True enough, but the surpassingly sad part of that voice is all the pain and self-torture that it was built upon, quite aside from the God-given gifts of raw vocal power it had been bequeathed.

For truly, Amy Winehouse’s voice and career and downward spiral of a life stand as an unanswered cry against the multiple and relentless outrages of existence, all the forces that seem to line up with special anticipation and glee when a soul at once so sensitive, talented, raw and ultimately, fragile, presents itself to us.

There are plenty of villains to go around in this tale that could easily enough grow tiresome, given how common is the spectacle of just another musician flaming out on booze, drugs and licentiousness. Indeed, there are those who will play the whole sorry scene as a basic morality tale of substance abuse leading to destruction, case closed, and they would not be strictly in error.

But nothing, least of all the emotional development of an astonishingly gifted but troubled soul thrown into the modern music world and its media maw, is ever quite so simple. There are, after all, legions of ex-musicians who harbored illicit substance appetites of epic proportions who are singing, though not always so lustily anymore, on the classic rock circuit, none too much the worse for wear save for the sallow skin and bloat they developed after so many years indulging the midnight munchies in hotel rooms. 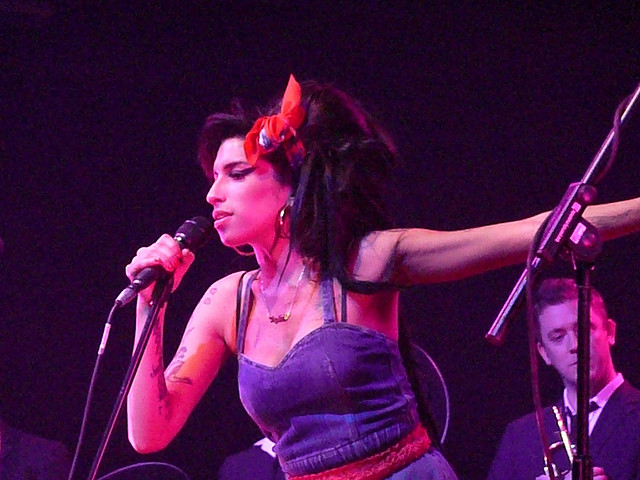 We will never know the answer to that question, other than to acknowledge there isn’t just one. She didn’t know the answer either, which no doubt was just one more contributor to the torment that continued to undermine her even as she won fame, artistic freedom and almost limitless riches in her chosen field.

In other words, she had arrived, beyond all rational hope and measure of her youthful musical self. But there was no way she could handle what followed that arrival.

She was already  bulimic, boozy and druggy as a young teen in North London. She turned despondent and rebellious, as she comments in the film, after her long-absent father officially left the family and divorced his wife when Amy was just 9.  She writes about that period with almost doomsaying insight in “What Is it About Men?”

Understand once he was a family man
So surely I would never, ever go through it first hand
Emulate all the shit my mother hated
I can’t help but demonstrate my Freudian fate

Her mother readily acknowledges totally losing control of her daughter even in her pre-adolescence, with Amy reflecting: “Mum, you should be stronger with me.”

We see Tony Bennett solicitous and patient with her in the studio as she struggles to gain some expressive footing amidst the peculiar amazement and terror that one of her childhood heroes is asking her to sing with him.

That is a consistent refrain in this impeccably paced and restrained film that weaves together reams of home video, concert footage and voiceover interviews in roughly chronological order to let her tale of doom tell itself with a powerful narrative arc. We know what’s coming, and it is not good, but virtually every second of the film is riveting. Amy’s towering presence (notice the first name basis I am on; it feels natural, though probably shouldn’t be) commands the screen, her towering, iconic beehive hairdo not even the least of it.

Trying from his own limited job description to temper some of her excesses, her bodyguard observes: “She just needed someone to tell her no.”

She reflects the same theme, imploring her boyfriend in “Stronger Than Me”:

You should be stronger than me
You’ve been here seven years longer than me
Don’t you know you supposed to be the man?
Not pale in comparison to who you think I am

But no one is quite up to the task, no matter how clearly they see where her path is taking her. And so she basically kills herself, or is killed by the addictive demons raging unchecked inside her, which too rarely let her rest into the comforts of her creative life.

“Fame doesn’t mean bollocks to me,” she says at one point. “If I could give it back just to walk down the street with no hassle, I would.”

This is after she becomes famous, though, and it is too late. Earlier in the film and her life, she reflects, inaccurately about her fame but presciently about how she would respond to it:

“I don’t think I’m gonna be at all famous. I don’t think I can handle it. I would probably go mad, you know what I mean? I would go mad.”

There is a deeply affecting few minutes in the film when none other than Tony Bennett, as classy and avuncular as the spring is bright, chooses her to sing “Body and Soul” with him on an album of collaborations. We see him solicitous and patient with her in the studio as she struggles to gain some expressive footing amidst the peculiar amazement and terror that one of her childhood heroes is asking her to sing with him.

Her sense of awe and modesty doesn’t look in the least bit feigned. This is the world-renowned singer whose songs stand as almost a repudiation of the very basis of that renown:

Bennett is a huge fan of hers, and for damn good reason; the woman is spectacular across a variety of genres and moods, with a voice and range that would surely have had her female jazz predecessors applauding from their graves. He lauds her in a post-mortem, saying she could have been as “great as Ella (Fitzgerald) and Sarah (Vaughan),” though probably a more apt comparison is to Billie Holiday, she of the tormented heart and shortened-by-drugs life as well.

But Winehouse surpasses them all because she was not only a grand interpreter who completely inhabited, laid into and commanded every song she deigned to sing, but because she also wrote her own intensely autobiographical songs, inhabiting those in a way I’m not sure I’d even want to hear anyone else do, for concern that it might constitute a kind of violation rather than tribute to her fierce and singular musical spirit.

“I’m about making tunes…just leave me alone,” she laments at another point, hoping for respite from both the external world and her inner demons. But both of those were to conspire against her, helped along to no inconsiderable degree by a father who came back into her life with obvious affection for her but also, from everything the camera tells us, an eye for a fine opportunity for fame and fortune. Her druggy boyfriend-become-husband Blake Fielder-Civil also contributes mightily to her descent, doing her alcoholic, constant weed-smoking self one better by introducing her to the world of crack cocaine and heroin.

She and Blake try leaving each other on multiple occasions, one of those occasions inspiring this, from “Back to Black”:

You went back to what you knew
So far removed from all that we went through
And I tread a troubled track
My odds are stacked
I’ll go back to black. 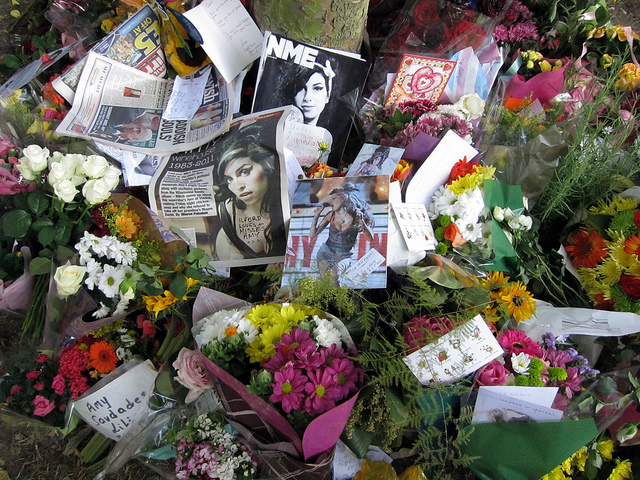 The blackness was seemingly unrelenting in her life, ultimately coming from so many directions—her youthful insecurities, destructive relationships with men, the descent into drugs, the unceasing intrusions of adoring fans and the media that served and profited from them and her—that she was on near constant overwhelm.

Late in her life, she stumbles onto a Belgrade stage in front of an enormous outdoor crowd that seems to stretch to infinity, waiting to adore her in their own bottomless need to genuflect before an icon who can absorb and reflect back everything they long to be.

But of course, she cannot fill that role. She is neither Jesus nor, most certainly, the Madonna, but only a deeply flawed human being with mammoth, unquenchable needs of her own. As the camera trains on her from behind heads in the expectant, fidgety crowd, she can barely stand up, so addled is her brain and body with the booze and chemicals that had even by then engendered a decline in her health.

So she stands there frozen and blinking, inert and incapable, and our hearts sink as the audience begins to jeer and her band plays blithely on, waiting for her to gather herself.

They could have waited a lifetime, it turned out, and it would not have been enough.

That life would never find itself again, never regain its central purpose of making music: sweet, raw, ferocious, soul-baring and meaningful music, while tuning out all the other noise.

Did anyone having fun or making millions off this song know what it would ultimately mean? Did she?

On Facebook? Check out this blog’s public page there for almost daily snippets of wisdom and other musings from the world’s great thinkers and artists, accompanied most always by lovely photography.
http://www.facebook.com/TraversingBlog