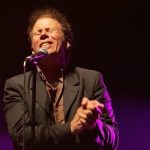 Waits never flirted with pretty, the ditch witch and its excavated mud far more his metier than is a glorious floral arrangement with an aria serving as backdrop.

Which is partly why “Take It With Me,” from his 1999 album, “Mule Variations,” is all the more of a powerful argument for Waits being one of the premier songwriters of our time, for which this song in particular stands as testament. And the thing is: The song is beautiful—in every way. Meaning melodically, lyrically, with its slow reflective tempo, its barebones instrumentation, and the ditch witch lamentations leavened by the glad-hearted memories of an old man.

Tom Waits: beautiful. We gotta deal with it.

Waits was 49 at this song’s writing, but in both vocal timbre and elegiacal perspective, he may as well have been Methuselah. (Who purportedly died at age 969, in case you were wondering.)

“Take It With Me” is rife with pregnant words, intimacy, and evocative phrases and maxims that stand on their own. In the first line, an old man has taken the (landline!) phone off the hook, gone invisible to all the world’s people but one—his longtime beloved, with whom he is about to celebrate something (likely an anniversary?).

“It’s a long time since I drank champagne,” he then observes, world- and perhaps overwork-weariness setting the stage for a meditation that will awaken and allow his expression of the deep abiding beauty he is coming to realize, stanza by stanza, about that world, his own memories of it, and the beloved he has shared it with.

“Ocean’s blue, blue as your eyes,” he tells her in the line following the champagne. (Eternity, the oceanic bliss of her blueness…)

Which then segues, abruptly, into the title line that serves as both mournful admission of the singer’s mortality and a statement of defiance and triumph, because no matter the mortality, “I’m gonna take it with me when I go.” (Rob him of memories? Not a chance; they’re his, and he will not be parted from them…)

And that gets us only through the first stanza.

Let’s have Waits do the honors for us now, his elocution clear through the gravel, though lyrics appear in the video and at the end of this post as well. We’ll follow with a little more discussion, then an alternate version that brings the song’s sheer melodic and lyrical beauty into perhaps sharper focus, even as Waits’s original take—haunting, prayerful, aching with pathos and memory— will likely always reign as the standard.

Yeah, I know. Bit of a heart punch, that.

Sure, the lyrics aren’t particularly sequential, the thoughts and verbiage sometimes disjointed. “Old long since gone, now way back when” is a strict English teacher’s nightmare but a poet’s delight, its strangely amorphous but evocative imagery leading to a specific geographical location of archetypal power—Coney Island! New York!—then concluding in the next line with the overarching philosophical  statement, “Ain’t no good thing ever dies.”

And he’s gonna take those things—every last one of them—with him when he goes.

My partner and I were both wiping tears when we listened to this last week in the kitchen while starting dinner. It’s what happens when a writer sets the stage in two stanzas with that kind of plaintive, abundant emotion, and then follows up with train whistles, waving good-bye, falling asleep on Beaula’s porch (Beaula!!), children playing and strangers singing, being “all broken down by the side of the road” (we all know that feeling), and then more summary philosophical renderings:

And then to the sign-off stanza, an almost biblical incantation of a land and a town and a house and a woman, which leaves us knowing our narrator has climbed the mountain of sadness and struggle and insight, has seen the promised land, understanding, finally, ironically, but with ultimate peace and satisfaction rather than bitterness, that it had been there all along, in the things he always and in every time had right in front of him, and has now come to remember and appreciate in all their fullness at last, great God almighty, fully at last.

I couldn’t find one bad cover version among the many awaiting on You Tube, the artists respectful and solemn in the face of what they know is a piece of musical heaven. Rachel Price and Chris Thile highlight the melodic and emotional wallop and loveliness attending the song. Enjoy!

And the full lyrics:

Take It With Me

Phone’s off the hook, no one knows where we are
It’s a long time since I drank champagne
Ocean’s blue, blue as your eyes
I’m gonna take it with me when I go

Old long since gone, now way back when
We lived in Coney Island
Ain’t no good thing ever dies
I’m gonna take it with me when I go

Far, far away a train whistle blows
Wherever you’re goin’, wherever you’ve been
Waving goodbye at the end of the day
You’re up and you’re over, and you’re far away

Always for you, forever yours
It felt just like the old days
Fell asleep on Beaula’s porch
I’m gonna take it with me when I go

I’m gonna take it with me when I go