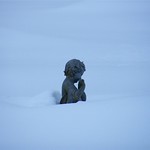 Waiting for the consummate rootsy-bluesy singer-songwriter Chris Smither to come on stage last weekend at Durham’s Blue Note Grill, we greeted our friend Michael the Sound Board Guy, who noted with a kind of respect-just-this-side-of-awe in his voice that the packed crowd was absolutely crawling with local musicians. Little wonder, given the “musician’s musician” label that Smither, now 76, has earned over a half-century of crafting songs that combine lyrical depth, humor, virtuoso guitar picking and a driving beat he keeps going with the slightly amplified foot-tapping that serves as his own rhythm section.

“I can’t not do it,” he once told an interviewer regarding his footwork, which involves both feet, heel and toe, tapping out the often syncopated rhythms that are but one of the qualities that give his music its distinct, “Oh, that must be Chris Smither” feel.

But as good as the pure melodies, rhythms and guitar picking are, Smither himself considers his lyrics the favorite and most important part of his now voluminous oeuvre, which includes 18 albums since his 1970 debut. And once one bathes in that world with him, it is hard not to agree.

If you’re not or only minimally familiar with him, there’s much more of his work readily available via the usual platforms, which I would heartily encourage you to explore. But for now, let us zero in on a love song of uncommon depth, feeling and range.

“Time Stands Still” is from his 2009 album of the same name. It is presumably written to his wife Carol Young, who was running a music management company in the mid-1980s, had seen Smither perform in the past, had noticed his absence from the music scene over quite some time, and gave him a call to find out what was up with that.

We can’t really be free until we know what limits, discipline and constraints are. Every child, every athlete, every spiritual person, every lover, comes to learn that—or else.

What was up was that Smither had been carrying on a love affair with bourbon for about a decade, had floundered in the way that people too besotted with alcohol tend to do, and, it turned out, was in desperate need of someone to help him get back on track. Young was that someone, at first professionally, later romantically.

So if we are to follow the general human trajectory of such things and believe these lyrics he wrote in the aftermath, we can surmise that Young pretty much saved Smither’s creative life, if not his very existence.

And among what they and all of us got in return was this achingly deep song of confession, desperation, devotion, appreciation, wisdom, and in a way we will touch on below, transcendent, divine love.

So, let’s have a listen, then peruse the lyrics a stanza at a time (you can read them afterwards in full here if you’re inclined), then wrap up with another video of him discussing this song and his creative process before signing off until #12 in this series. (See here for previous posts.)

Blindness starts us off, not of the visual kind, but a blindness of spirit, will, and self-direction. A blindness that doesn’t see life for what it could be, but instead for what it can fall prey to.

I’ve been blind, she’s been kind.
She knows at times I forget to see.
Through a cold dark cloud,
An imaginary shroud or a shadow settles over me.
I once was smart, it was back at the start.

Lot going on there. Blindness, a cold dark cloud and imaginary shroud, the admission that he has lost his way, is no longer “smart” or whole in the way he was in more innocent, less spirit-bruised days.

And then the fear clanging its warnings and casting aspersions against all commitment, all actual change, all opening to the fierce ravages of the heart:

I offered her my body and my soul.
Thought in my heart it would tear me apart;
It made me whole.

Hearing this as much as we do through life—big love/big risk/big reward (and yes, maybe big heartache…)—it does no good in the abstract. Every person who is fortunate enough to have it presented to them must traverse that treacherous territory alone before its wisdom is won, no matter their age or situation. (Smither was in his ’40s when he faced this existential choice, got off the dime of indolence, and took the plunge.)

Carol is presented as the straightest of shooters in the next verse:

Keep it simple, keep it clear. It’s what we like to hear.
She don’t argue, she don’t ever lie.
If I say it’s so, it’s so. She don’t want to know
If it’s a metaphor or something in disguise.
She let me know, a long time ago
It’s better to say just what I mean.
Truth to tell it can hurt like hell,
But it keeps me clean.

I love the lines about her not wanting to hear about metaphors and disguises. For all we know, she may well esteem them in poetry and fiction and in Smither’s songs, but in a relationship, “Oh geez, my love, just give it to me straight now, O.K.?”

Much as metaphors can reveal deeper layers of meaning and reality, so too can they obfuscate and conceal. And in the paradoxical way of such things, the truth can indeed “hurt like hell” before it…heals.

My guiding star, I don’t stray far.
I keep her in my mind and in my eye.
I’ve been lost before, but never any more.
I just look up at my compass in the sky.
I had my fears, in the early years,
That I’d locked me up and throw’d away the key
I lost my mind to the ties that bind,
But it set me free

First time I heard and read those lines I thought Smither had maybe written the whole song as metaphor, and that this verse gave it away. A “guiding star/my compass in the sky” suggests a divine dimension, that it was God herself who had been the guide, the compass, the soother of fears, and the gateway to freedom.

But Smither is not much for conventional religion, and in this expression of ardor and humility, it’s more like he’s channeling Dante and the latter’s beloved, idealized Beatrice. This is archetypal love, savior love, down-on-our-knees-in-worship-and-appreciation love.

The difference, though, is that most reports indicate Dante met Beatrice but two times in their lives, only briefly and in passing, whereupon Dante built an edifice of the imagination and heart to fancy her as his own gateway to the divine.

Smither, on the other hand, actually had Carol, in the flesh, right there in his house. And unlike Beatrice, she returned his love.

Which set him free—despite his fears that the ties would bind him. No small point there, either.

We can’t really be free until we know what limits, discipline and constraints are. Every child, every athlete, every spiritual person, every lover, comes to learn that—or else.

Oh she’s fast, I know I’ll never ask,
She’s by me now but I don’t really mind
I hardly know, I’m oh so slow,
My shadow often kicks me from behind.
I once was fast, in the distant past.
In a mighty demonstration of my will,
I kissed her twice at the speed of light.
Time stood still.

I kissed her twice at the speed of light,
And time stood still.

Seems Carol always saw through and past him, knowing and seeing him more deeply than he did himself. One could make the argument that most successful couples do exactly that, each of their shadows kicking them from behind even though the other partners see the shadows always looming, plain as day.

But in any case, our hero is given to reflect now on his distant past, his impetuous, moving-fast youth, when he enjoyed the ignorance and chutzpah of innocence, and deigned to kiss her “twice at the speed of light.”

Neither the world nor the time that sends it hurtling along has felt the same since.

***
Five more minutes of richness here: “It’s a process of having a conversation with part of your mind you’re not on speaking terms with….eventually, she shows up.”

Cupid in snow by Stanley Zimny, “outside NYC” https://www.flickr.com/photos/stanzim/