Whatever our material accumulations, we are poor indeed without a sense of the larger and deeper context, purpose and delight of our interior lives.

Some people access that realm chiefly in a religious tradition, others in nature, service, art, acts and expressions of love. One thing that virtually all of humanity shares in common, however, is that we touch it in music.

Doesn’t much matter which genre, epoch or setting—all of us, since the earliest cave drummers, have been nourished and inspired by the taps and pulses, strums and twangs and lilts of people using their voices and implements to fill us with peace as well as provocation, joy and sorrow, wild abandon and quiet contemplation.

Where and who would we be without it? 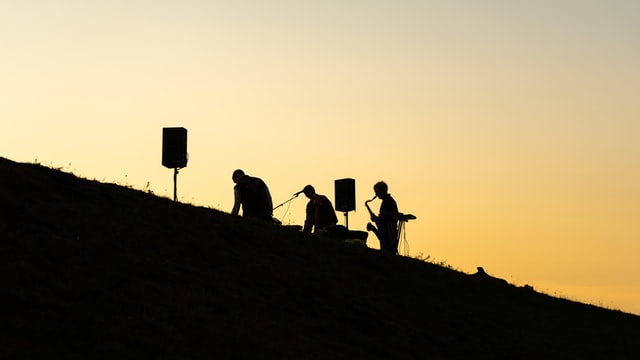 Sometimes a piece of music arrives that seems in perfect conjunction with its time. This makes “Hymn for These Times” a pretty much perfectly named song, especially given that its final iteration dates only to last April, after the Covid-19 pandemic was well on its way to disrupting the lives of most people around the globe.

That would include the song’s composer, Jay Rogers, and lyricist Meggan Moorhead.

Rogers wrote it as a piece of pure, unnamed piano music about a decade ago (You Tube version at the end of this post). It grew out of the improvisation he has long practiced while sitting at the baby grand piano he keeps in his living room in Cambridge, Massachusetts. He refined it over time and found himself returning to play it more intensively as the Covid crisis deepened and he found the song’s mood meeting its mate in the crisis.

That’s also when he gave it a title.

“It was always about how in the end, we will be one, despite our divisions,” he reflected in a recent phone interview. “About that sense of loneliness in the world; a sort of sadness while at the same time: hope.” 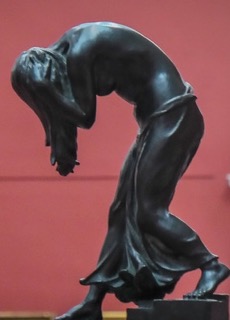 Last year, as the pandemic descended, Rogers found himself unable to find the “inner tranquility” to ascend to his upstairs studio where he had spent the better part of 40 years being a solo woodworker. Longing for connection again amidst the disconnections of the pandemic, he picked up the pace of both his teaching and the playing and composing that he had always maintained amidst his woodworking days.

He and Moorhead, a Durham, North Carolina-based psychotherapist by day and poet-lyricist by night, had collaborated on several songs in the 1980s when they were neighbors in Boston, and had always kept in touch. When Moorhead saw Rogers’s Facebook post with the piano version last April, her immediate thought was it was “the most beautiful thing I’d ever heard.”

Her second thought was in the form of a question to him: “Does it have words?” When he answered no, she asked if she might try to supply some.

“I was hoping you’d ask me that,” he replied.

Here is the result of that conversation, with a remarkable assist from vocalist Sam Robson, a London-born musical wunderkind who accompanies himself in four-part harmony as a kind of one-man a capella group, master of the multi-track and a wondrously expressive vocal range.

“Music for me is abstract, sort of disembodied,” says Rogers, qualities that the tune itself suggests with a kind of fathomless sadness saved only by its transcendent, ethereal beauty. “Meggan captured its essence and then brought it back to earth, placed it as a moment in time. She incarnated it.”

This lovely use of the word “incarnated” is shot through with religious connotations in the Judeo-Christian tradition in particular, though Rogers and Moorhead both fall more along the “spiritual” side of the “spiritual or religious?” spectrum that underlies so much modernist deliberation.

Sometimes, though, that question becomes more academic than useful. Is religion confined to a church pew and set of beliefs? Is it “spiritual” but not “religious” to address sadness, grief, hope and healing of the human heart in a time of carnage? With images of night and stars and mother’s lullabies, golden light and tender leaves, tears of sorrow and rising streams, a bird chorus and “the simple truth where we as One belong?”

Music such as this is sacred in its deepest sense—denoting reverence rather than reason, the silence between words, comforting above cogitating, heart rather than head. It hews as closely as anything to religion’s Latin root, “religare”—meaning “to bind.”

Bound we all are indeed by this pandemic. Bound to our homes, our screens, our masks, venturing carefully out on our byways, casting furtive glances at our fellow sufferers, taking a wide berth, far from the danger posed by the very breath that keeps us alive, muffling the very words of welcome we might extend to one another in recognition of all we share.

“Hello, fellow human. Hello in there.”

Bound, too, by the urgency with which we seek that again.

“Not one voice but many voices. Not one note but still One song.”

A song as luminous as the stars above, a beacon in this dark time, its few haunting notes and words making for all the meaning we can ever hope to absorb.

The original, with Jay Rogers at piano… 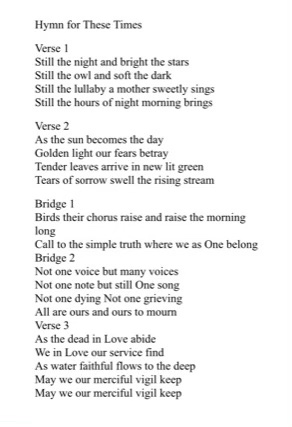 Music on the hillside by Razvan Mirel, Copenhagen, Denmark  https://unsplash.com/@razvan_mirel

12 comments to Brilliant Songs #20: Jay Rogers and Meggan Moorhead’s “Hymn for These Times”