Sometimes it happens this way: You’re 9 years old in the fourth grade and your stern-but-fair teacher Miss Ruth Ferris has had the remains of an old paddle steamboat hauled onto your school grounds a little ways off the Mississippi River in St. Louis. She does so partly for fun, and partly for the sake of instruction and storytelling on the ways and boats and people of the river, which she reveres.

You stare at the boat in awe, climb up into its pilot house, run your fingers over its paddlewheels—and you feel something taking root in you. You don’t know it yet, but you will never forget these moments.

Then, barely a teen, your jaw drops the first time you hear Earl Scruggs play the banjo, so now music joins the river in a grand and passionate fusion. You start taking gruntwork jobs on paddleboats and never stop loving on them while you also master the banjo, fiddle, guitar and mandolin before going off to college to study commercial art.

But then there was Miss Ferris the dreamer, who got that boat hauled up into the schoolyard using her practical ‘politicking’ wiles but decades later was able to share, with what turned out to be a prized student, this lovely, plucky creative expression…

But your music blossoms, and another decade on, you have a well-regarded career that by no design whatsoever opens doors to key roles on television shows with the likes of the Smothers brothers, Glen Campbell and Johnny Cash. Then you’re offered the lead role in a detective series that would require extending a long-running stay in Hollywood —but put a crimp in your music-making.

Enticing as that may sound to others, you also feel torn from your midwestern roots, your musical haunts there and further south, and the rivers and boats that have continued to call to you over the years.

So midway through your 30s, you say good-bye to all that.

You move east to Nashville, keep producing albums in a steady stream, and also begin to make good on Miss Ferris’s gift by getting trained as a steamboat pilot. Then, you earn your license and establish a parallel career taking people up and down the river, which you sometimes extend by serving them a heap of your music at night.

And after a few years, it occurs to you that you just might have a song for and about Miss Ferris in you. 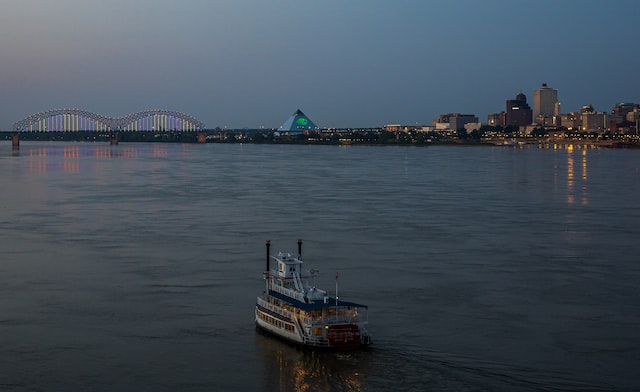 That was the case for Hartford, whose career as a midwestern folkie-bluegrass-country composer and musician saw him earn a fiercely (though “tenderly” may be a more relevant word) devoted following and a fierce amount of money after he wrote and recorded “Gentle on My Mind” in May, 1967 to only modest airplay and sales.

But Glen Campbell was thunderstruck when he heard it on the radio, so he hastily assembled a group of musicians and recorded his own version barely a month later, ultimately making it, according to BMI Music, the 16th most frequently played song on radio and television in the entire 20th century. (Commercially successful covers of the song by the likes of Frank Sinatra, Dean Martin, Roger Miller, Elvis, Aretha, and Patti Page also helped push that number along.)

It’s a strange position to be in, because a monster hit always brings monster royalties to the songwriter, even as the song is forevermore identified with the singer rather than the person who wrote it.

For Hartford, though, the absence of credit bothered him not at all. For one thing, the song landed him the regular musical and even scriptwriting gig for “The Smothers Brothers Comedy Hour” mentioned above. Campbell sang it there, soon landed his own show, and invited Hartford to lend a hand there, too.

It was a heady few years for the generally shy and creative soul Hartford was, but the financial freedom also allowed him complete freedom as an artist, able to answer whatever creative sirens called to him for the second half of his life, which was ultimately cut short in 2001 by non-Hodgkins lymphoma. He was but 63 years old.

But many years before that, in 1977, he paid homage to Miss Ferris with the song of that very title. My favorite version of it here shows him in all his glory, plying his twin passions, doing what he loved, the instrumentation bare but the storytelling in full power mode. Let’s give it a listen and then read the lyrics before wrapping up with a bit of discussion.

Now I had a teacher when I went to school
She loved the river, and she taught about it too
I’se a pretty bad boy, but she called my bluff
With her great big collection of steamboat stuff
Oh, yeah

She had log books and bells and the things like that
And she knew the old captains and where they were at
She rode the Alabama and the Gordon C. Green
As the Cape Girardeau, she was later renamed
Uh-huh

But her very favoritе, as you all know
Was the Golden Eagle, Captain Buck’s old boat
This old stеrn wheeler sank and went to heaven
When I was in the fourth grade, in nineteen forty-seven
Uh-huh

Well, now, fast people in St. Louis society
A-takin’ a trip on the Mississippi
Sleepin’ in their bunks after an after-dinner drink
They didn’t think the boat would sink
Oh, no

Well, I know Captain Buck was a very sad man
When that old wooden hull went into the sand
And Miss Ferris was sad for sure
But immediately, her mind went to work
Oh, yeah

Well, she did some politicking that was tricky and hard
And she got the pilot house for the schoolhouse yard
And so, instead of studying, I became a dreamer
Dreaming ’bout boats and the Mississippi River
Uh-huh

I had to work real hard to get my school work done
‘Cause you couldn’t fool Mis Ferris none
And, if I went to sleep or I weren’t supposed to talk
Oh, she was a dead shot with a little piece of chalk.
Uh-huh

Oh me, oh my, how the time does fly
Time and the river keep a-rollin’ on by
Now, I am not a student and she is not a teacher
But, we both still love the Mississippi River
Uh, huh

Well, I went to see her this Christmas last
We took a little trip back through the past
On the easy rocker we looked at pictures
And we dreamed our dreams of the Mississippi River
Uh-huh

Oh me, oh my, how the time does fly
Time and the river keep a-rollin’ on by
Now, I am not a student and she is not a teacher
But, we both still love the Mississippi River
Uh, huh

Late in his life, Hartford confided to a reporter: “I’m a riverman first, a musician second, to support my steamboat habit.” Which was not to say that music didn’t course through his blood.

But rivers themselves are so given to stories that people who fall in love with them pretty much can’t help telling their tales. So it must have been particularly rewarding for Hartford to track down Miss Ferris in his adult years so they could reminisce on their shared passion. (Even more rewarding for her, one could easily surmise.)

I couldn’t find information on whether Miss Ferris lived long enough to enjoy the homage of a song in her name, but Hartford has painted a musical portrait of her here that shimmers with life everlasting.

We’ve likely all had all-seeing teachers who brooked no bullshit from their imaginative students weaving tall tales explaining away their misbehavior or failed assignment. And in an elementary school in the 1940s, that could easily result in “a dead shot with a little piece of chalk” heading the student’s way, with no complaint or lawsuits filed by parents.

(Actually, it was still happening in the mid-60s, when my friend Jake and I inspired Mr. Pratt, for no-doubt good reason, to grab, thank goodness, for a soft eraser rather than a hard piece of chalk and hurl it rather forcefully our way, his face red and the tell-tale vein on his forehead popping a-plenty.)

But then there was Miss Ferris the dreamer, who got that boat hauled up into the schoolyard using her practical “politicking” wiles but decades later was able to share, with what turned out to be a prized student, this lovely, plucky creative expression that had given their dreams a voice.

Watching the video, it was easy for me to imagine one of those mature ladies listening to Hartford serenading them on his beloved paddleboat being Miss Ferris herself, perhaps there with a sister or longtime friend. “You have to come see an old student of mine who’s now a riverboat pilot,” she might have said. “He’s a musician, too, and he wrote a bunch of songs about the river. And I’ll be darned if he didn’t name one after me.”

Hartford managed to avoid the fate he sings so plaintively about here, but let it not be said he lacked empathy for those who became enmeshed in it…