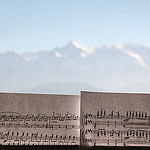 “Rhythm stirs our bodies. Tonality and melody stir our brains.” So writes Daniel J. Levitin in This Is Your Brain on Music.

I find myself wondering why he didn’t say “brains and hearts” about tonality and melody, given their powerful capacity to inspire, stir and deepen human emotion.

I know that rhythm goes right back to the heartbeat of the mother who begat us, and is central to our moving about in this life. Rhythm plays a key role in my own writing as well—each sentence has to match some internal hop-and-skip-along, and if it doesn’t, I discard it until the feel is right. If it feels clunky rhythmically, it goes.

That said, in music, I’m a melody man, which is why rap, with its 100 percent rhythm, and modern classical music, with its disdain for tone and melody, leave me mostly unmoved. They can be “interesting” intellectual exercises, but honing my intellect is not why I listen to music. I’ve got a library and a laptop loaded with Google for that purpose.

I rely on music to stir my heart, to make me dream and weep and immerse in all my deepest longings for beauty and love and universal brother-and-sisterhood. And for that, a good hummable melody is the ticket—sometimes, though not necessarily—enhanced by lyrics.

Melody is all over classical music, which partly explains its tenacity in continuing to be played in concert halls across the world over the past several hundred years. Beethoven, Mozart, Haydn et al may fade from cultural consciousness someday, but that day, thankfully, has not arrived.

And of course, pop music is a land of a million melodic ditties, each of them designed to worm their way into our consciousness so we go about our days unconsciously humming their tunes (and then consciously buying the music and lining up for concert tickets). We’ll take a look and a listen to three of my personal favorite classical/pop music crossover pairings here.

This compulsively hummable tune probably has the most intriguing pedigree of the songs discussed here, given that for several hundred years “Minuet in G Major” was attributed to none other Johann Sebastian Bach, who actually, either via intentional deception or oversight, included it in his Notebook for Anna Magdalena Bach without attributing it to Petzold. So the piece bore Bach’s authorship since its debut in 1725.

It wasn’t until the early 1970s that an industrious music scholar unearthed convincing evidence that Petzold, a highly-regarded-at-the-time but long-forgotten organist and church composer, was the actual author. (Score one for devoted researchers toiling in dusty archives the world over…)

There’s a child-like simplicity to the tune, and though some versions go longer, it’s nice and compactly done here.

Two hundred and forty years later, The Toys, with an assist from writers Sandy Linzer and Denny Randell, brought the tune to the iconic rock TV show of the era, Hullaballoo, and it sounded tight, lovely and full of heart.

This soaring, gorgeous piece has a kind of tripartite history, first as part of Russian composer Alexander Borodin’s 1887 opera, Prince Igor, where it uses full orchestra and chorus to powerful effect, despite the somewhat dismal subject matter of a bunch of slavegirls ballet-dancing furiously to win the approval of a taciturn Khan, who has invaded Russia and is being resisted, none too successfully thus far, by Prince Igor. (“Sing songs of praise to the Khan! Sing! Praise the power and valor of the Khan! Praise the glorious Khan!”…“Yeah, right,” Khan seems to say. “What’s it take for a guy to get a beer in this joint?”)

Sixty-plus years later, producer/writers Robert Wright and George Forest adapted Borodin’s main melodic line in their musical Kismet, making it into the song “Stranger in Paradise,” a duet between Vic Damone, a heartthrob of the Sinatra sort at the time, and Ann Blyth, who tries, though not very hard, to resist the love in which they are already hopelessly entangled in the usual almost farcical Broadway plot lines. Here it is…

Hot on the heels of that hopelessly alluring treatment came first Tony Bennett, then Johnny Mathis and a host of others, including Sarah Brightman, Isaac Hayes, The Supremes, and Neil Young. (Oh, the strange bedfellows that music can bring about!)

My personal favorite is the Mathis, perhaps because I think I heard it first among all these others, but also for that impeccable “Mathisian” phrasing and feeling.

I have a rather distinct bias here, given that I consider the original Rachmaninov quite possibly, in my humble estimation, the greatest musical piece ever written, and the segment shown here perhaps music’s greatest five minutes.

It’s an impossibly lush and evocative melody, tragic and beautiful, searing and lovely, as if it gathered up every visible and hidden nuance of human emotion and brought them all into the tender light of acceptance, understanding and love. Evgeny Kissin does it proud here, as have so many others who have paid it homage since Rachmaninov himself debuted it as the soloist in 1901 with the Moscow Philharmonic.

Much lesser known is the tune adapted in 1945 to the song “Full Moon and Empty Arms,” done first by Frank Sinatra. (Was there any song that man didn’t sing, and sing well?) It was later covered by just a few hearty souls, the lioness Sarah Vaughn among them.

It then seemed to lay fallow for a long time, until none other than Bob Dylan tackled it last year in his Shadows in the Night album of classic vocals.

Some wise-acre You Tube comments on Dylan’s version: “He really cannot sing,” and: “The people who defend this don’t have tin ears, they have no ear at all.”

All these singers turned it into a romantic love song, which is fine as far as it goes, but Rachmaninov had more than boy-girl love in his mind and heart when he sat at his piano to flesh out this piece.

Finally, a singer I had never heard of before, Eric Carmen, did a kind of violence, I think, to Rachmaninov by filching the tune for his over-wrought “All By Myself” in 1975. A nice piece of poetic justice: Rachmaninov’s estate went after him, since he reportedly neglected to go through any of the usual copyright niceties before cashing in on the piece.

In any case, Celine Dion then went Carmen quite a bit better in the tortured emotion department with her 1996 version that has thus far been viewed an astonishing 7.5 million times on You Tube.

I take solace from the thought that there have likely been more than 7.5 million ears attuned to Rachmaninov’s original since 1901.