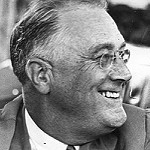 In 2009, if President Barack Obama had let it all go—allowed the banks to fail, GM to go out of business, the whole incipient Depression to descend as it would after the insistent anti-regulatory, tax-cutting machinations of the Bush administration reached their natural dark end—the American economy and the fortunes of its people would have gone into freefall. The suffering and dislocation would have been on a scale not seen since The Great Depression.

Many conservatives at the time were advocating just that—for the country to “take its medicine,” not rely on another government bailout that reeked of a dreaded “socialism.” They wanted Americans to snap up their big-boy britches and get on with the tasks awaiting an over-the-cliff, do-it-yourself, deregulated economy, in near total shambles by then but finally freed from the pseudo-protective shackles of government assistance and oversight.

It would have been an ultimate “draining of the swamp.” But it didn’t happen.

To which all I can say is: Thank God for Franklin Delano Roosevelt, and his spiritual heir in the Democratic Party: Barack Obama. 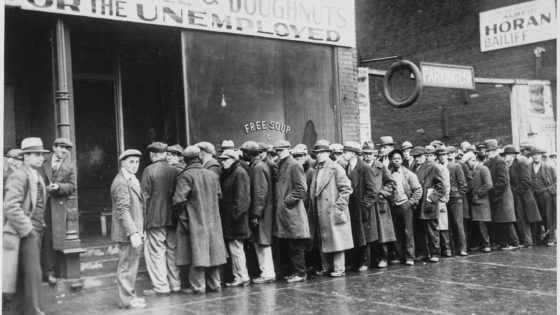 I am thinking these thoughts on a day when I experienced a curious and surprising mix of nostalgia, reflection and gratitude as I submitted my application for Social Security benefits to begin on my next birthday. Yes, the program that both before and after its passage in 1935 was denounced by conservatives of the time such as 1936 Republican Presidential Candidate Alf Landon, who scoffed:

“This is the largest tax bill in history. And to call it ‘social security’ is a fraud on the workingman. I am not exaggerating the folly of this legislation. The saving it forces on our workers is a cruel hoax.”

That would be the same “cruel hoax” perpetrated on employers, workers and taxpayers by the unemployment insurance that tagged along with Social Security, as did the beginnings of the welfare system which sought mainly to aid single mothers who were raising children on their own and struggling to keep food on the fractured family table.

If the check I’ll be getting deposited directly into my bank account come June is the product of a ‘cruel hoax,’ I’m hoping the ‘big government’ that is so insistently reviled by conservatives can figure out how to pull a few more hoaxes on me before I become compost for this world.

Roosevelt’s “New Deal” has been followed over the decades by other measures designed to help lift up the less fortunate and less endowed, the elderly and disabled and infirm. The intention has been to put a floor under their lives that at least keeps them fed and clothed and housed in a fashion befitting a human being rather than an animal foraging for every last bit of life sustenance.

Later measures included food stamps and free school lunch programs for the impoverished, various college tuition supports, the Head Start program,  Medicare, Medicaid and so on. Conservative Republicans of a particular stripe—call them the Darwinian School of Everyone on Their Own—have tirelessly opposed every one of these “cruel hoaxes” that they see as extensions of a coddling  welfare state that destroys people’s initiative and fosters their lifelong dependency.

Given the ravaged economic condition of millions of elderly citizens in 1935 and the question of how a humane civilization would meet the challenges they posed, Social Security was the most prominent of the “big government” programs Roosevelt proposed, so it of course attracted the most sustained fire from conservatives. And in 2017, demographics being what they are, it remains in conservative crosshairs, fueled further by claims that the system is doomed to bankruptcy.

In actuality, some minor tinkering with the income subject to Social Security tax, along with other adjustments, would ensure the system’s solvency long into the future. (See this Kiplinger’s article for a good overview.)

In any case, all I can say in response to many conservatives’ dark Darwinian vision of how to best organize an economy is this: If the check I’ll be getting deposited directly into my bank account come June is the product of a “cruel hoax,” I’m hoping the “big government” that is so insistently reviled by conservatives can figure out how to pull a few more hoaxes on me before I become compost for this world.
*** 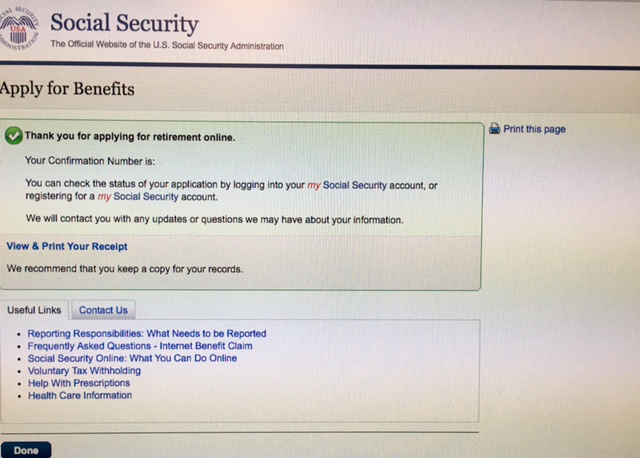 What is it about conservative Republicans that makes them so hostile to any measure that would provide adequate safety nets to the less endowed, the elderly, lower class working people, and, perish the thought: the unemployed?

We are having to ask that question all over again this week as the, indeed, “cruel hoax” of the Republicans’ attempted dismantling of the Affordable Care Act proceeds through Congress in favor of what virtually every independent analyst has unmasked as, yawn, yet another grievous cut to those on the middle and lower rungs of the economic ladder. According to the Kaiser Family Foundation, among others noting the same projected outcome of “The American Health Care Act” intended to replace Obama’s Affordable Care Act (ACA):

Generally, people who are older, lower-income, or live in high-premium areas (like Alaska and Arizona) receive larger tax credits under the ACA than they would under the American Health Care Act replacement. Conversely, some people who are younger, higher-income, or live in low-premium areas (like Massachusetts, New Hampshire, and Washington) may receive larger assistance under the replacement plan.

As written and passed out of the Ways and Means Committee by the Republican-controlled House in the wee hours Wednesday morning, we can call the replacement bill a kind of typically Republican “reverse socialism” that subsidizes the well-to-do, just as all the income tax cut proposals that will flow out of the White House and Congress in coming months will also do if our president can ever get his fingers loose from the Twitter app on his phone.

• It does away with the Net Income Investment Tax, which will reduce the taxes on the top 0.1% of earners by an average of $165,000 but will cost the U.S. Treasury an estimated $158 billion over the next 10 years, according to Bloomberg News.

• It would also expand the $500,000 cap on the deductibility of health insurance executives’ compensation to $1 million while allowing all performance bonuses to be deductible. This means insurance company boards of directors can again return to bestowing multimillion dollar salaries and bonuses on their chums in the executive suites, saddling taxpayers and patients with a good portion of the bill by way of its tax deductibility.

All the truly radical income redistribution to once again coddle the wealthy duly noted, I am neither ignorant nor in complete disagreement with the standard conservative arguments against a sprawling, cradle-to-grave welfare state.

Yes, straight handouts can foster the “culture of dependency” that conservatives so abhor.

Yes, handouts should be accompanied by a corresponding “hand up” (and sometimes a quick “encouraging” foot in the pants from behind).

I’m fully on board with ferreting out the healthy and able freeloaders, the welfare queens and kings and fraudsters who game the system, just as every system ever invented has been gamed by enterprising opportunists throughout history. (Including by far the most profitable and adept gamesters of all: the wealthy with their legions of tax-avoidance experts on the payroll.)

But conservatives seem obsessed and narrowly focused only on the fraudulent and lazy, and often make those adjectives sound synonymous with “poor.” The newly appointed Secretary of Housing and Urban Development, Ben Carson, said as much when he recently reiterated his line that “poverty is really more of a choice than anything else.”

Well, yes: if one is nothing more than a shiftless ne’er-do-well.

But this ignores two far more prevalent issues: that fully 4.1 percent of the adult population (10.5 million people) living below the poverty line do work full-time, according to the most recent data from the Bureau of Labor Statistics. And of the nearly 35 million others working part-time or not at all, we know, by the ancient practice of “looking around us,” that a hardly insignificant portion of  them were born or not endowed in early life by the tools with which to be effective and responsible.

Or they suffer various catastrophes from which they never recover.

We are neither born nor raised equal, and some lose the ability to make the world work for them. Or they never figured it out at all, hapless creatures from the get-go.

What are we to do with them?

We coax, we channel, we cajole, we enroll them in programs to deal with their intellectual or skill deficit, their executive function, their ADHD, their alcohol or drug addiction, their mental illness, their inability to groom and dress and apply for and get and hold a job.

When all the measures we take still can’t keep the unfortunate or unable in an adequately paying job or any job at all as contributing members of society, what shall we do: leave them to die in the streets? This is the fundamental question a civilized society has to ask even more urgently in a rapidly changing, globalized, increasingly technological society in which there will surely be losers, and they will be in the millions. (Excuse me: not “will be…” They already are.) 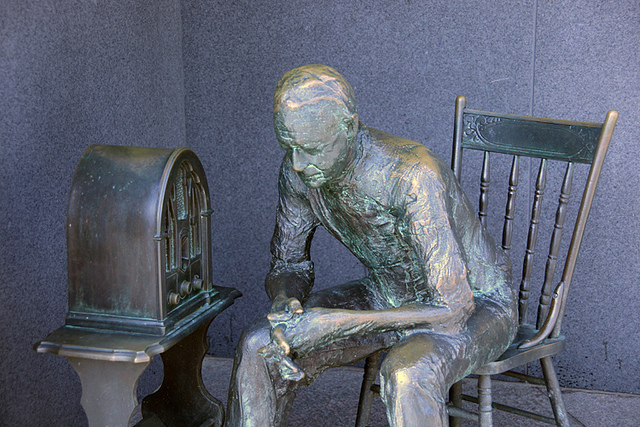 For my own part, I will soon be seeing a not insubstantial check go into my account every month, the wages of my nearly 50 years of paying into the Social Security system finally beginning to flow back to me. I will also continue working, both because I like being productive and helpful and because I don’t have an abundance of confidence that the overall economic picture won’t get even more worrisome in coming years.

But I am choosing to do so because I have been blessed beyond all measure by apparently good genes (knock on wood with that…), a loving upbringing by emotionally expressive parents, reasonable intelligence, and many other attributes (including maleness and whiteness, neither of those factors negligible either).

I do not have to look far or long to find legions of people not nearly as fortunate, who are instead inert, ungifted, unlucky, unable, struggling and thrashing about on slow-moving treadmills that deposit them nowhere.

These are the marginalized, the dispossessed, the intractably poor, sometimes through no fault of their own but yes, sometimes due to their own damn fault.

Again: should we let them just get poorer, get sicker, go hungrier and die as the programs designed to provide them the flinty existence they do eke out are even now on the budget chopping block in congressional committees?

The poor population in this country is about to get the shaft, again, under a regime that blames them for their ills, tells them to just get off their duffs, and does so with the coup de grace in this proposed new health care bill of giving their counterparts in the richest stratospheres of the economy yet more money to do with as they please.

And we haven’t even gotten to the forthcoming, even more substantial gifts in store when Trump & Co. get around to ramming through income tax cuts that will overwhelmingly flow to the top 1 percent (and less) of the population.

All that fun is still to come as we barrel along a blame-infested road to “making America great again.”

FDR photo near top of page courtesy of the Roosevelt Library and Museum,  some rights reserved under Creative Commons licensing, see more at: https://www.flickr.com/photos/fdrlibrary/