How (and Why) Do They Do That? Notes on the Murmuration of Starlings 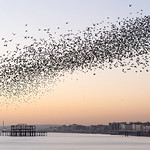 One of my go-to lines whenever I behold some unbelievable scene of nature that I am compelled to believe because I am seeing it with my own eyes is, “That almost makes me believe in God.” In many ways, I have woven a whole theology around that sentiment, about God not as a being but as energy, not a noun but a verb, an expression, an animating essence of all things large and small, dark and light, a perfect marriage of the transcendence we strive for and the immanence that we are.

I think that may just about be it for my theologizing today. (Though I reserve the right to change my mind before I’m through turning things over here.)

It’s as if hundreds of different chamber orchestra septets were cuing only off each small group member playing the same dazzlingly fast Bach concerto, which then becomes a huge symphony orchestra spread across a vast landscape, all keeping perfect time using only an invisible inner conductor.

In the face of the rhapsodic phenomenon known scientifically as the “murmuration” of starlings, those gatherings of darting, swooping, wildly whirring black birds forming dark cloud dances across winter landscapes, theology can come up sounding rather limp, unequal to the task of paying proper—if silent—homage to the glory of the cosmos and all its creatures.

So let’s just address this question instead, which usually comes right after the involuntary exclamation of “WOW!” that everyone utters within seconds of seeing a starling murmuration commence: “How do they do that?” 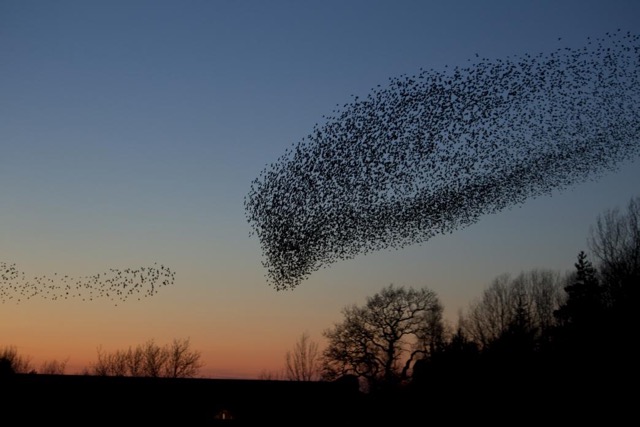 But first, back to that word: “murmuration.” It strikes me as nearly perfect in sound and sense, with just the right amount of onomatopoeia (the term for a word sounding like the sound it makes, e.g. “beep” and “sizzle”). This will be reinforced all the more when you catch the video just below, with its natural sounds allowed to bring you viscerally into the experience.

Murmuration has a generic meaning relating to the “low continuous sounds or complaining noises” that we know as “murmuring.” But it also refers to “a large group of birds, usually starlings, that all fly together and change direction together.”

Note the “usually starlings” there. Turns out that a few other types of birds can also murmurate. (Yes, it works as a verb, too!) Among them are various raptors, geese, robins and flamingos.

But none of those bird species do it with anywhere near the seemingly manic intensity, in the almost countless, tightly packed numbers, with the breathtaking changes of direction, that starlings do. Which is why the word “murmuration” is sort of unofficially reserved for starlings alone in popular usage.

Here, have a direct hit now, and then we’ll delve into the hows and whys of all that murmurating.

Good God! Watched that quite a number of times now, and much as I enjoy musical accompaniment to nature scenes, the natural din that this many rapidly beating wings makes overhead can’t be beat by any human creation.

I feel fortunate to have witnessed any number of murmurations over my years on this earth, though never with the immense size of this one.

Perhaps only thunder-and-lightning storms can rival it as natural phenomena that make me happy just to lie back and gaze upwards in appreciation and awe.

Key difference, though: storms don’t involve living creatures flying furiously within inches of each other in a dazzling aerial ballet. How does that happen?

“…one leading scientist suggested that birds must have psychic powers to operate together in a flock. Fortunately, modern science is starting to find some better answers.”

(I’m tempted, but that note of moving from superstition to the observation and data-gathering of science will inspire no further elaboration from me here, theological or otherwise…)

The authors then went on to cite a landmark 2008 study by five researchers in Italy. The group was…

“…able to film starling murmurations around the rail station in Rome, reconstruct their positions in 3-D, and show the rules that were being used. What they found was that starlings sought to match the direction and speed of the nearest seven or so neighbours, rather than responding to the movements of all of the nearby birds around them.” 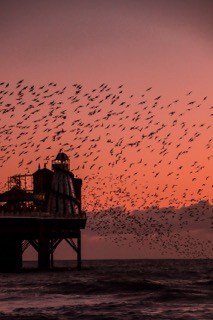 I will again stop short of theology here and merely note the sociological and anthropological implications of creatures seeking to “match the direction and speed of the nearest seven or so neighbours” in order to carry out highly complex, split-second maneuvers as part of a vastly larger group.

I’d always assumed starlings must employ some kind of super sonar ability to carry on their group flights, of the sort that bats use for their own navigation. But it seems both simpler and more complex than that. In actual practice, all starlings pay close attention to maintaining speed and distance in perfect concert with their immediate small group, multiplied by thousands of other equal-sized small groups that hold forth as one stupendously large and cohesive group.

It’s as if hundreds of different chamber orchestra septets were cuing only off each small group member playing the same dazzlingly fast Bach concerto, which then becomes a huge symphony orchestra spread across a vast landscape, all keeping perfect time using only an invisible inner conductor.

My other long-held sense from past murmurations: a wondering if, in some ineffable sense, these creatures know that what they’re doing is beautiful, and even if not, at least a helluva lot of fun.

Might they be murmurating simply for pleasure, like the squirrels in my neighborhood who playfully chase each other around trees, or the canines at the dog park fetching and rassling the afternoon away until they go limp from exhaustion?

Murmurations, utterly poetic and aesthetically soaring as they are to us observing humans, are far more about the prose of survival than the poetry of joy.

Starlings group up and dart and swoop and dash in order to evade and confuse predators. They seek safety in the tsunami of their beating wings, noise, and breakneck flight patterns, which they hope will finally discourage the raptors hoping to make a meal of but one of them.

I once witnessed and posted a poem about a hawk who plucked a crow right out of the air in front of me. Dazzling and deadly efficient as the hawk seemed, crows are no match for starlings in evasive maneuvering, so I pity the poor raptor approaching a starling cloud with its eyes on a prize. Bunnies and rats would seem to be far easier prey. 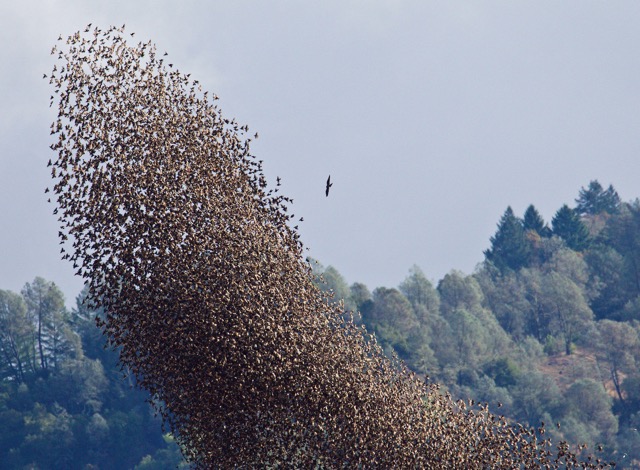 O.K., so that’s the good vibe part of starling life and flight. But just as every construct of heaven has its hell, every ray of light its shadow, starlings, too, have their nay- and doomsayers.

In some quarters, they are derided as an “invasive species,” an ecological epithet usually reserved for the ghastly influence of monster fish that eat up all their gentle brethren, or noxious weeds that grow the size of a football field every day and make once fluid and flourishing waterways into bogs.

A 2020 history.com article on “7 Invasive Species That Have Wreaked Havoc in the US” listed starlings at No. 4, behind, thankfully, feral swine, Burmese pythons (one of whom strangled a two-year-old toddler in Florida), and domestic cats, but ahead of swamp rats, Asian carp and gypsy moths.

The starling rap sheet includes decimating crops, polluting waterways, causing disease, and, in 1960, enough of them getting sucked into the engine of a departing jet at Logan Airport in Boston that the plane crashed and killed 62 people. 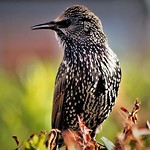 Hard as it may be to prosecute a case against a creature who pairs so nicely with classical music and is beloved by photographers, the charges are serious and have a tempering effect, dammit, on our adoration. It may or may not be a consolation for us to learn that starlings, invasive though they be, were brought here for literary, if nevertheless still lunkheaded reasons: because a Shakespeare loving New Yorker sought to bring every bird the Bard ever mentioned in a play or poem into North America.

Eugene Schieffelin’s role in starling history began in 1890 when he imported 60 of them into the U.S. at great expense and then released them into a cold and snowy March day in Central Park. They were not expected to survive, but survive they did. (Another purpose of their murmurating, I neglected to mention above, is that it helps them fight off the cold…)

Today, Mr. Schieffelin’s efforts are responsible, in a truly for-better-and-for-worse trade-off, for the estimated 200 million or so starlings who grace our winter skies, beget our cries of delight, consume entire fields of wheat, outhunt native birds by virtue of sharper beaks and better vision, create disease-causing fungal spores, and were characterized in a 2014 BBC report as: “Thickset and pugnacious…the bruisers of the avian world…now such a nuisance they are one of the few bird species unprotected by law.”

To which I can only assume starlings would reply with a simple, only slightly “pugnacious” riposte: “Unprotected? Ha! Catch us if you can, and meanwhile, take a look at this!”

***
Of course they go great with music, too! (And morning coffee…)

Starling clouds at sunset by Danny Green for https://www.wildlifetrusts.org

Starlings and raptor by Nick Dunlop for Audubon Magazine https://www.audubon.org/magazine/winter-2017/

2 comments to How (and Why) Do They Do That? Notes on the Murmuration of Starlings