Hungary and Syria: A Tale of Two Diasporas 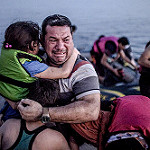 We are born into a particular place to particular people, absorbing the world we find and then habituating to its rhythms and requirements. The routine of being cared for intimately in a state of comfort and stability is our natural desire and need; children cannot thrive without it.

That said, human beings grow to become curious, adventurous and mobile creatures, often, though not in every case, ranging far from our original habitats in voluntary pursuit of economic betterment and new experience.

There is an involuntary shadow side to our mobility, however. Sometimes, life confronts us with forced relocation when famine, political upheaval or war (those three are often related) give us little choice but to leave our nests and strike out, in desperate circumstances, for the great unknown.

When this involves great swaths of a population, it merits the biblical term “diaspora.” (Deuteronomy 28:25, from the ancient Greek “diasperein”—to “scatter across.”)

“Diaspora” is exactly what has been occurring in the long-running Syrian Civil War, and the images from that scattering are enough to break one’s heart.

Gazing at hundreds of photographs over the past weeks depicting the Syrian refugee crisis, I couldn’t help but notice that one of the multiple venues to which Syrian families were attempting to flee was Hungary, the country my own parents fled from at the end of World War II.

In 1945, Russians were moving into Hungary to claim their booty as the Allied powers negotiated the spheres of influence that would be divided up among the victors. My parents left in the waning days of the war to avoid the hard fist of Soviet domination coming their way, opting instead to become officially “displaced persons” in a ravaged Germany, which was controlled by the Americans.

Seven years of frequent relocations later (my older sister, brother and I were all born in different German cities), their emigration lottery number came up and we boarded the U.S.N.S. General Harry Taylor on a voyage across the Atlantic. I was an 8-month-old baby in my mother’s arms. 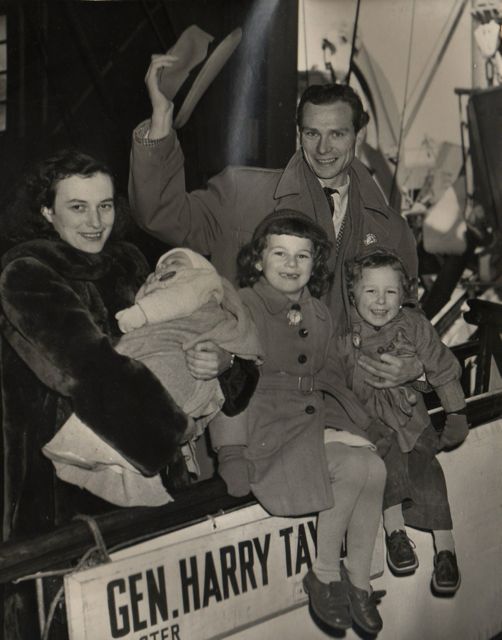 The photo above is deceiving in at least two ways. One is in the physical appearance of my mother and father, looking rather luxurious in stylish winter coats, with their children seemingly the product of prosperous and doting parents.

Second is the happy and self-assured countenance my parents are projecting, my mother radiant and my father dapper in doffing his hat, no doubt at the behest of the photographer for the Woodbridge, New Jersey newspaper where this shot appeared. The long caption noted that we were being welcomed and hosted in town by my father’s cousin.

What it didn’t say was that my parents had arrived on these shores without a penny. No, not even one penny to their name. And that the “cousin” was a distant one, whom my father had never met, and who had a one-bedroom apartment he shared with his wife.

And that our five-person family would be occupying their small living room, until such time as my father, who spoke no English and had no particular professional skills at age 33 (he had been a track star and reserve Army officer in his native land), could land some type of job.

And that our cousin wasn’t too happy about all the foregoing, but he acceded to it with somewhat grudging generosity (in the short-term, at least), for the sake of “family.”

It all turned out O.K. for our family, despite the rather foreboding prospects attending our immigration. My dad worked hard, landing two minimum wage jobs and working 16-hour days for a good spell before we could secure our own apartment.

Credit need also be given, though, to a generally hospitable environment at the time for refugees from the war, involving as it did the whole of Europe where so many Americans traced their own roots. And where refugees like us didn’t look too different than those who were opening their borders (and apartments) to us.

And now let us fast forward to the eruption of the Syrian Civil War in 2011 and the nearly six years since. 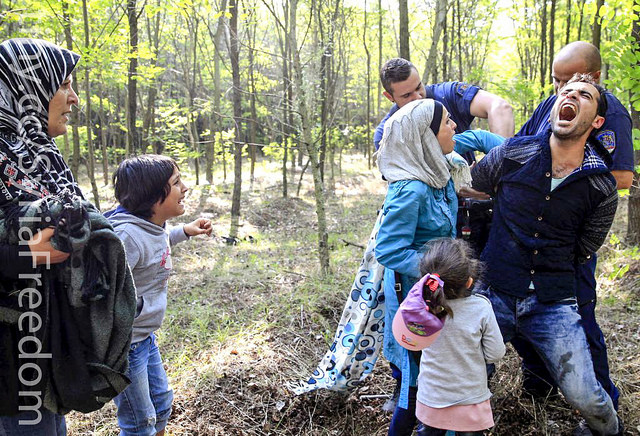 The photo above, by Reuters photographer Bernadett Szabo, shows Hungarian policemen accosting a Syrian family that had just entered Hungary from Serbia in August 2015. Like ours, this family also shows three children, though their countenance is quite a bit different than ours was.

Nor is the father doffing his hat for the camera.

This family had been fleeing a brutal Civil War in which the Syrian government had long since invited in the military might of the Russians and Iranians, among others, arrayed against an improbable coalition of homegrown rebels, Turks, Kurds, Saudi Arabians and opportunistic ISIS fighters. The whole rebel stew is supported only tepidly by the U.S., which is caught between various rocks and hard places of overlapping foes and friends.

The family had trekked across Serbia and crossed into Hungary with the hope of attaining asylum, but Hungary, beset by its own economic woes and the xenophobia espoused by far right parties that have been in ascendancy in recent years, had no welcome mat out, no friendly newspapers noting their arrival in town, no room in any inn.

The Eotvos Karoly Policy Institute in Budapest noted that of 18,000+ asylum applications in the first five months of 2016, only 76 people were given refugee status. Yet the desperate, exhausted and terrified Syrians continued coming, by the thousands. 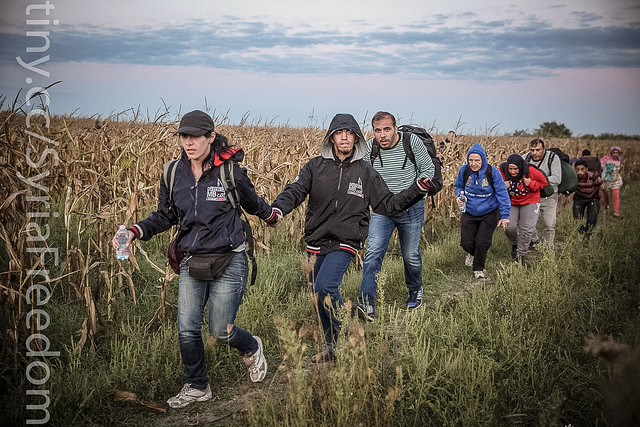 It’s hard to know how much of the undoubtedly racing hearts of the refugees in the photo above can be attributed to the physical exertion of racing through a field, and how much to the sheer terror and fear of being caught, imprisoned, and worse. Signing on with and likely handing what there was of their life savings over to smugglers for obviously perilous border crossings through unfamiliar lands suggests a desperation few of us in the West have ever known.

But gazing at the almost nightly videos of bombed out cities and their bloodied or rubble-buried children, it is not difficult to imagine refugees despairing enough to proceed. The flight from their homeland and all of its previous familiars can be seen as a last grasping for hope, a star-crossed tumble toward some shred of light at the end of a very dark tunnel.

In the photo below, we see that hope apparently extinguished in a family that had lain down on railroad tracks near a camp in Bicske, Hungary, with the intent of committing suicide by having  the next passing train run over them. One struggles to comprehend the sense of despair that had driven these parents to seek such  a drastic fate.

Yet the police, too, deserve our considered reflection. What might have been going on in the minds of officers, following orders on jobs that required preventing desperate refugees from entering the country, and then preventing others from killing themselves?

Every diaspora, one must conclude, is its own improbable tale of the heroic and tragic, the appalling and incomprehensible. 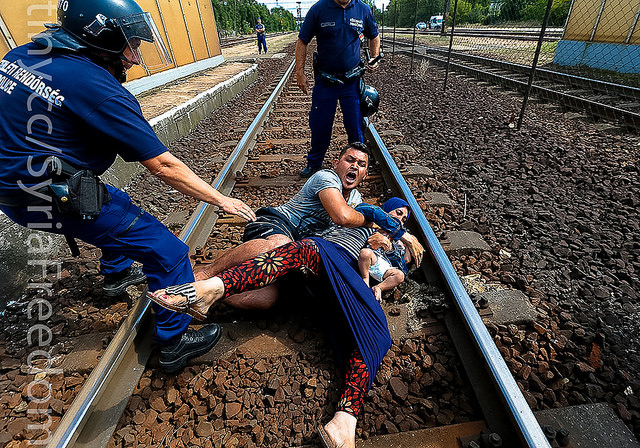 We live in a troubled world. We are acutely aware of that fact in 2017, though it was even more true in 817 and 1217 and also 1917, when “the war to end all wars” was at its zenith of worldwide, senseless horror. My father was born a year later, at World War I’s end, only to come of age when the madness resumed a quarter-century later, engulfing Europe once again in a conflagration that shook the very foundations of humanity’s belief in itself.

Millions of refugees were displaced following World War II, and that is not even to count the 6 million or so of them who were Jews and whose displacement saw them land in death camps to meet their end. The luckier refugees fanned out to virtually every country in the world, received if not with warm-hearted welcome and parades, at least with a civilized and compassionate tolerance that took note of the suffering they had endured.

My parents were among those tip-toeing tenuously into a new country and culture, hopeful, frightened, acutely attuned to picking up cues on the mores of their new land. They were part of history’s seemingly endless diaspora, reflecting the dismal realities of humankind’s penchant for conflict even as it has revealed our countervailing qualities of mercy and brother/sisterhood.

Our world in 2017 could use quite a bit more of those latter qualities. The challenge to bring them forth is clear.

6 comments to Hungary and Syria: A Tale of Two Diasporas