Iceland’s Awesome Volcano and “The Idea of the Holy”

When restaurants open fully up again and we can begin to enjoy all the familiar rituals such as our server exclaiming “Awesome choice!” when we order the chocolate truffle rather than crème brûlée off the dessert menu, I will suppress the urge, being the generally kind person I try to be in most every circumstance not involving Ted Cruz, to snag my phone out of my pocket and click onto the You Tube channel featuring the video footage I am going to show you below.

That will include refraining from even light-hearted but definitive commentary along the lines of, “Oh, you poor sheltered child, you don’t know from awesome! HERE is Awesome!!”

I am moved to share these sentiments after spending a good part of my morning marveling at the sheer, well, awesomeness of the volcanic eruption that began lighting up the mountains some 25 miles outside the Icelandic capital of Reykjavik on March 19. That’s when the Fagradalsfjall volcano finally erupted after several months of earth rumblings that had put the world on notice that something loud and bright, glorious and terrible, was in the offing. 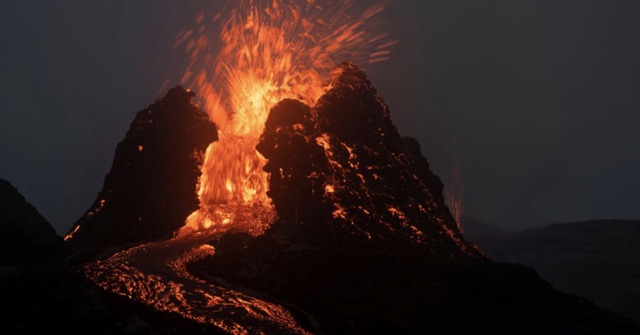 None of this is to make light of volcanic eruptions and other natural phenomena that can turn into disastrous and deadly events for earthly creatures large and small, human and not. Nature can be terribly unforgiving and totally beyond every living thing’s control, a stark and persistent reminder that the mountains and rivers, clouds and tides and winds always laugh and destroy and (sometimes) forgive last.

But there is a case to be made at the same time for the dazzling, humbling beauty of an erupting volcano, the world aglow in the night, rivers of lava popping, sparking and pouring out of the crater and flowing down the mountain in a menacing and majestic assault upon everything that would remain placid or nonchalant.

It is among Kali’s many powers that she sets the terms of these encounters, for which there will be no negotiations. The best we can do is to accommodate ourselves to them, either by fleeing when the situation warrants, or hiking up the mountain and gawking when it allows.

And if we’re not in position to hike (or send up a drone), to rely on others who are—which is what we’re going to do now.

In his seminal 1913 work, “The Idea of the Holy,” the German theologian and philosopher Rudolf Otto put forth his concept of the “numinous,” which he defined as a “non-rational, non-sensory experience or feeling whose primary and immediate object is outside the self.”

To this he appended the term “mysterium tremendum,” an experience in human consciousness so outside the ordinary and so fraught with raw power and wonder that the self feels humbled and dwarfed, begetting reactions that can include or combine fear with reverence, awe and humility with a kind of frozen-in-place terror.

This is the burning bush that confronted Moses, Paul’s travail on the road to Damascus, the vision of fathomless suffering presented to Buddha.

Otto posited these types of events as the very foundation of religious consciousness, a point outside time and ego, visited upon the human mind as a reminder that we are neither the beginning nor end of this world, these worlds, and we are well advised therefrom to bow down and accept our place in the cosmic order.

It is upon that powerful, utterly “other” and transcendent edifice that we build our lesser religious sensibilities of theologies, spiritual communities, church socials and moral do’s and don’ts.

And make no mistake: were he alive, Otto would love to be on hand in one way or other for the Days of Awe we are currently witnessing with respect to the Iceland volcano. Watching that scalding lava bubble and form its own channels of fire down the mountain, we get a window into the universal experience of the numinous he details with nearly scientific rigor, but which still begets a kind of poetry for the soul: words to bravely describe what is ultimately wordless, yet always in front, behind, under and over us every moment of our lives.

“The daemonic-divine object may appear to the mind an object of horror and dread, but at the same time it is no less something that allures with a potent charm, and the creature, who trembles before it, utterly cowed and cast down, has always at the same time the impulse to turn to it, nay, even to make it somehow his own. The ‘mystery’ is for him something not merely to be wondered at but something that entrances him; and beside that in it which bewilders and confounds, he feels a something that captivates and transports him with a strange ravishment, rising often enough to the pitch of dizzy intoxication; it it the Dionysiac-element in the numen.”

That sounds a lot like my morning, I must say—although thankfully, it invoked much more of the “potent charm” and “intoxication” elements than the horrifying ones. I’ll take that as at least one advantage to living some 3,000 miles from Reykjavik, but with an awe-inspiring window into its world.

Some Carl Orff to usher us out, and as a bonus track, it’s LIVE from the Fagradalsfjall volcano!