If you watched my “debate” last night with Donald Trump, you were perhaps as horrified at what you beheld as I was. I will not belabor all the ways in which the president of the United States degraded his office, himself, and most importantly, you, the people of our beloved democracy. It was a performance so over the top as to leave observers not only stunned, but grasping for commentary that would befit the unprecedented spectacle they had just witnessed.

As difficult as I know it was for you to watch, and as excusable as it was if you simply gave up early in the proceedings and curled up with a good book or your children or the family dog, I will tell you it was a very challenging circumstance for others in that hall last night as well—including myself and the beleaguered moderator, Chris Wallace.

I felt for Mr. Wallace in his valiant attempts to corral the proverbial bull in a china shop, and if you watched, you know the almost insurmountable challenge he faced. 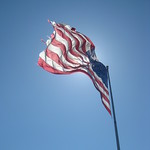 Upon reflection, I am myself sorry I occasionally succumbed to President Trump’s repeated, aggressive interruptions and slashing, derisive style with invective of my own. Virtually everyone who has encountered the president in political discourse or tried to be of service to him as a moderating influence on his persistent outlandishness has discovered, in short order, how nearly impossible the task is.

That was not so much a debate last night as it was a mud wrestle, and none of us involved were well served.

That includes, most importantly, you, my friends.

America suffered last night—in its capacity for civilized discourse, adherence to facts, commitment to fundamental decency, and once again, in our reputation around the world.

A president resolutely unwilling to refute white supremacy, unwilling to commit to a peaceful transfer of power, telling his extremist, armed base to “stand by” after the election, relentlessly shouting over his debate opponent and moderator through an exhausting 90 minutes—these are not normal behaviors, and they should never be accepted as such.

The American people deserve much, much better, and the sad truth I am facing this morning is the near certainty that they will not get anything better in the two scheduled debates still remaining.

That is why I am informing the Commission on Presidential Debates this morning that I am—regrettably but resolutely—cancelling my appearances in those debates.

Everyone who watched or read about the proceedings last night should by now have a crystal clear window on their choice in November. No further purpose can be served by exposing the American people to two more occasions that embarrass rather than enlighten them, making them despair for their democracy rather than celebrate it.

The time for that celebration will come in November, if you, the American people, turn out to vote and make your voices of decency and thoughtfulness heard.

On my end, I will do everything in my power to make sure that what you witnessed last night does not, can not, and will not define our nation. And I, for one, will not give Mr. Trump any more opportunity to attempt to do so.

Joe Biden
Candidate for President of the United States