Please forgive the impossibly pretentious headline above. I think Rev. Martin Luther King would both forgive and understand it, because he above all would appreciate the tremendous sense of solidarity engendered by his justifiably famous “Letter From Birmingham Jail” and all the other events of 1963 in this quintessentially Southern town that would so change the course of history.

I arrived here on the eve of the 50th anniversary of George Wallace’s theatrical standing in the University of Alabama school doors to ostensibly prevent the admittance of black students in defiance of a federal court order. (Wallace at least had enough sense not to actively defy the federal marshals and troops sent there by President Kennedy and his attorney general and brother Bobby to enforce the law.) I paid respects with my family at the now historic 16th Avenue First Baptist Church where Ku Klux Klansmen murdered four young black girls by firebombing their religious education class. 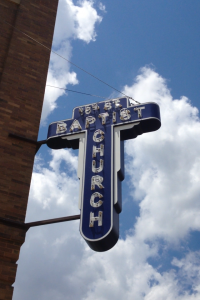 We then proceeded across the street for a glorious and gritty tour through the Civil Rights Museum, which celebrates, among other things, Birmingham’s role as a kind of Ground Zero for the tumultuous events of the era. Though “celebrating” seems like an odd word for events whose center included the heartless murder of four young black girls and countless other atrocities, one can’t view the timelines, photographs and videos of the era without:

1) being tremendously moved by the courage of not just the Martin Luther Kings and the Rosa Parkses and other well-known heroes of the movement, but of the mostly anonymous students, mothers, fathers, children and others who stood up to the fire hoses and German shepherds, who weren’t deterred by the horrific images of young black men swinging  from trees by their necks. Who found themselves seized by the historical moment and the courage and demand for dignity it summoned forth from them. They may not have known it was in them—I don’t know that it’s in me; is it? But the call of their leaders, their God, their own consciences and the others beside them on the whites-only lunch stools and in the paddy wagons managed to tamp down the natural fear attendant to such incendiary events. Theirs was a fierce hope and strange optimism amidst the hatred directed their way. Hope and love prevailed. If I were perhaps a more faithful and stalwart person myself, I may not be as amazed at that fact as I am, but it is undeniable. Hope and love prevailed—just like that strange book Reverend King based so much of his life on said it would.

2) noting that while the legacy of what is almost the indescribably horrific practice of human slavery is still very much working itself through the fabric of civilization these few centuries later, we are a better country and world now than when these battles for the most basic of human rights were being fought just a half century ago. That far from having died or suffered in vain, the brave souls highlighted in Birmingham and similar museums sprouting up through the south threw their pebbles into a hugely rippling pond that ultimately manifested in a virtual tsunami.

I am still shocked and awed that we have a black president in this country—that it happened in my lifetime. Never thought.

I am still amazed that the Berlin Wall came down without the continent being vaporized and hardly a shot fired. Never could have predicted.

I could not have imagined South Africa doing any less than imploding in a horrid blood bath as apartheid cratered and the baser instincts of humanity would be unleashed. Didn’t happen; how did that happen?

That student staring down the tank in Tiananmen Square in 1989? Suppressed, for the moment. But not forever. He had the spirit, and it very much lives. Drawing close to those events from the perspective of history here in Birmingham, it would be a dismal failure of courage in me not to live in the hope and love he and his brothers and sisters have manifested over the centuries of this grand struggle for universal—and very much personal—human rights. It is the very least I can do as my tiny contribution to the historical drama whose remarkable aftermath we witness and live in today.

For the full text of Reverend King’s Letter From Birmingham Jail, see: http://abacus.bates.edu/admin/offices/dos/mlk/letter.html

2 comments to Letter From Birmingham