Mainline to the Heart: A John Prine Homage 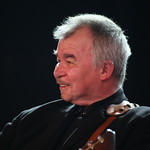 I’d been reflecting lately with friends that as bad as the coronavirus is, one glimmer of light is that I had not yet learned of anyone in my personal orbit coming down with the disease, and more widely still, no one in all of my own friends’ and acquaintances’ orbits had either, at least to my knowledge.

But then the news that John Prine had come down with the virus and was in ICU. And now he has died.

Well, not personally—but actually, I did!

That’s what happens with great artists whom one pays attention to over years. They crawl in through your skin, mainline themselves right to your heart like a powerful drug, move in like an Artist-in-Residence, bestowing their gifts in an endless stream through your life.

John Prine’s songwriting has always combined humor and pathos, mischief and solemnity, devil-may-care and tragedy in a way that not only few other artists do, but that also reveals a whole human being, able to contain and abide the elements of light and dark that characterize the fullness of human existence. He could make you laugh and cry, sometimes in the same song and even the same lyric line, sometimes the crying from sadness, sometimes from high (and low!) humor, sometimes from all of it jumbled together in a joyous, insightful, emotionally raw stew.

Here’s the first stanza from “Sam Stone,” written when Prine was under 25 years old and released his debut, eponymous album in 1971.

Sam Stone came home,
To his wife and family
After serving in the conflict overseas.
And the time that he served,
Had shattered all his nerves,
And left a little shrapnel in his knee.
But the morphine eased the pain,
And the grass grew round his brain,
And gave him all the confidence he lacked,
With a Purple Heart and a monkey on his back.

And then the chorus, which begins with what I think may just be the single most powerful, haunting line in songwriting history:

I don’t know how many thousands of times I have heard, sung, contemplated, appreciated and repeated that line in my life. I think it is about as perfect as one could possibly get in revealing a powerful, shattering tale, a whole world of woe, in a compact 11 words.

Dazzling, heart-rending, the envy of every poet worth a damn.

When I woke up this morning, things were lookin’ bad
Seem like total silence was the only friend I had
Bowl of oatmeal tried to stare me down… and won
And it was twelve o’clock before I realized
That I was havin’… no fun

But fortunately I have the key to escape reality
And you may see me tonight with an illegal smile
It don’t cost very much, but it lasts a long while
Won’t you please tell the man I didn’t kill anyone
No I’m just tryin’ to have me some fun
Well done, hot dog bun, my sister’s a nun

The utter silliness and wordplay of that last line stands as a perfect cap to a song that celebrates the light-hearted escape offered my smoking a doobie, even as he lamented the darkness of drug addiction in the lyrics of “Sam Stone” in the same album.

Contradiction? No. This was John Prine, embracer of the world.

We had an apartment in the city,
Me and Loretta liked living there.
Well, it’d been years since the kids had grown,
A life of their own left us alone.
John and Linda live in Omaha,
And Joe is somewhere on the road.
We lost Davy in the Korean War,
And I still don’t know what for, don’t matter anymore.

So if you’re walking down the street sometime
And spot some hollow ancient eyes,
Please don’t just pass ’em by and stare
As if you didn’t care, say, “Hello in there, hello.”

That’s “Hello in There,” a somber homage to aging and a plea for basic human dignity, empathy and care. Again, Prine was not yet 25 when he wrote those lines.

A bit later, in the 1973 album “Sweet Revenge,” he followed with this:

Dear Abby, Dear Abby
My feet are too long
My hair’s falling out and my rights are all wrong
My friends they all tell me that I’ve no friends at all
Won’t you write me a letter, won’t you give me a call
Signed, Bewildered

Bewildered, Bewildered
You have no complaint
You are what your are and you ain’t what you ain’t
So listen up, Buster, and listen up good
Stop wishing for bad luck and knocking on wood
Signed, Dear Abby

Many lines make one chortle and sing along in that ode to the famous advice columnist, but for me just the word, “Buster” is so pitch-perfect, so reflective of the real Abby’s measured but forthright finger-wagging to an obviously hapless ne’er-do-well, that it has kept me laughing over decades.

But then this, the first stanza of “Souvenirs,” from “Diamonds in the Rough” in 1972:

One could slow-forward for hours and days with great profit through another nearly half century of music-making and the performing that Prine loved and his devoted fan base surely loved equally in return. Tempting as that is here, I leave it to you for a later time, content now to revisit him in this limited way, his loss fresh and devastating, putting an utter and full human face on this unfolding viral tragedy.

I saw John Prine three times in my life, twice in medium-sized venues with a backup band and another, earlier time sitting on a stool at the Sonoma County Fair, guitar in hand.

I preferred the latter, solo, plaintive and playful by turns, the fun-loving, dead-serious artist and human being that he was, surveying the human condition in all its absurdity and purpose and mirth, waywardness and renewal, seeking and finding and losing again, ever the stumbling pilgrim looking slightly askance at the world yet pronouncing it worthy always of attention and tender, soulful care.

Good-bye, old friend, to you and your ancient, knowing eyes…

18 comments to Mainline to the Heart: A John Prine Homage