Melanie, the BuddhaChristLamaDoormat of “Gone With the Wind”

“Gone With the Wind” is an alternately enchanting, preposterous, compulsively readable/watchable turbo-charged romance of seduction, goodness and cynicism. Along the way, it is also top-heavy on the myth of a doomed Southern nobility fighting to preserve its way of life against the “invading hordes” of abolitionist heathens.

Watching the movie version the other night for probably the fifth or sixth time thanks to the cultural treasure of “Turner Classic Movies,“  I was struck more than once with cynical guffaws and groans as scenes of wildly extravagant balls and untold riches played out under a patina of honor and chivalry that was in truth built upon the backs of slaves.

That said, I was also struck as never before by the character of Melanie Wilkes, the noble Ashley’s golden-hearted, ever-faithful wife.

Melanie contends with main character Scarlett O’Hara’s long-running obsession with stealing Ashley away from her by showering her with love, kindness and regard for all the qualities of headstrong liveliness that Melanie sees lacking in herself, and by never abiding anyone talking smack about Scarlett.

And what does Melanie say out of Scarlett’s earshot? Exactly the same.

Some 75 years after the movie’s 1939 debut, in a magazine interview discussing her role as Melanie, Olivia de Haviland (who died in 2020 at age 104) shared this bit of wisdom from director Victor Fleming that got her to the core of Melanie’s approach to life and the people in it:

“The first time we worked together was when we filmed the scene where Melanie, engaged to Ashley and therefore the future mistress of Twelve Oaks, greets Scarlett.
We rehearsed and I was warm, pleasant, and polite. He drew me aside and very gently observed, ‘Every word that Melanie says, she means.’ That direction was an invaluable key to her character, and it served me throughout the film.”

So: someone unfailingly kind and gracious who sees the best in everyone, looks blithely past the worst, and never talks snark—neither publicly, nor in confidence with an intimate, nor in the confines of her own mind and heart. Even if a particular someone is chasing her husband using every one of her considerable feminine wiles.

Saint or doormat? Is it even possible to live like that? Is it advisable? Would anyone even want to try? 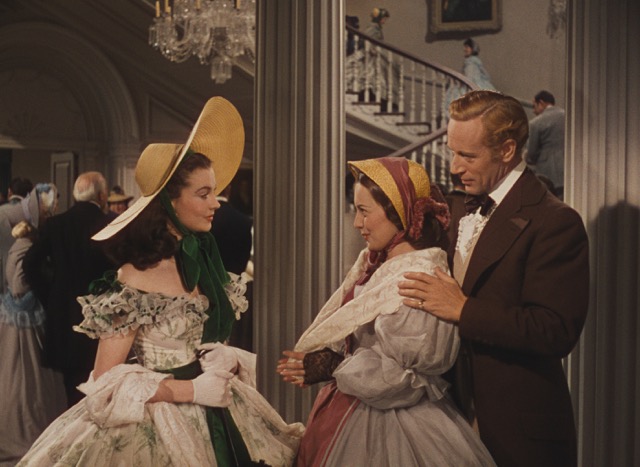 Love triangle, though not in Melanie’s mind…

Melanie has more or less twin foils in the persons of Scarlett and her eventual husband Rhett Butler, two almost self-admittedly (Rhett more forthright about it than Scarlett) amoral characters who rarely if ever let a moral concern interfere with their essentially materialistic, transactional approach to life and people.

As a male, Rhett, of course, is free to exhibit his cynical moral compass as an attribute, an indication of his machismo and worldliness, a force to be reckoned with. Women, however (especially in the South), have to veil any such traits within the constraints of formal politeness and charm—even if they don’t mean a word they say and can’t back up their wide smiles with a shred of actual warmth.

But herein lies the yawning gap in moral rectitude between Scarlett and Melanie, exemplified in a passage from Margaret Mitchell’s acclaimed 1936 novel that Hollywood recognized as a potential blockbuster almost before the ink was dry on the book’s 1,037 pages:

“Scarlett exercised the same charms as Melanie but with a studied artistry and consummate skill. The difference between the two girls lay in the fact that Melanie spoke kind and flattering words from a desire to make people happy, if only temporarily, and Scarlett never did it except to further her own aims.”

Now: politeness ranks very high on the list of desirable human attributes. It lubricates a requisite measure of social as well as commercial intercourse, affording each party the modicum of regard necessary to avoid the discomfort of unbridled self-interest. 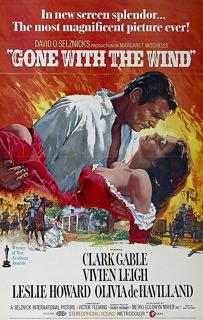 That said, we all know the difference between real and fake intimacy, between someone trying to reach our soul or our wallet. Between seeing into us or right past us toward a shinier bauble they sense would be of greater benefit to them.

But the question Melanie poses is: How are we to respond to such purely transactional, or even worse, nakedly ill-meaning people?

For her part, she chooses not to respond to those parts of anyone she encounters, but to instead zero in on—and thus (hopefully) call forth—each person’s positive attributes, such as they may be. Not by rebuking another’s deficiencies or offenses, but by refusing to let the person be defined by them.

“I see you as a good person, perhaps even better than you think you are,” Melanie’s attitude towards all people suggests. She not so much calls to their better angels as she sees those angels, and thus implicitly encourages them to call them forth for themselves.

She does this not only by looking past Scarlett’s schemes to snag Ashley, but also by trusting in the better angels of Ashley, who could (and did) remain faithful to her. The deduction we might draw is that her trust is fearless and brave to the core.

Not a doormat but a warrior, ready to put it all on the line in favor of an open heart.

On the other hand, here’s Rhett, addressing Scarlett:

“I love you. Because we’re alike. Bad lots, both of us. Selfish and shrewd but able to look things in the eye and call them by their right name.”

Rhett holds up this jaundiced view of human nature (or at least his own nature) by claiming it to be real, even “right,” because it’s unclouded by easy sentiment or wishful thinking that people are better than they are.

A kind of self-proclaimed and smug study in supposed bravery. “I’m a skunk, but I know and admit it. And I won’t be changing.”

Yet here’s his take on Melanie, describing her to Scarlett: “There’s too much honor in her to ever be dishonorable to anyone she loves.”

And here’s another interesting sidelight to that take: Rhett does not think her to be foolish, out of touch or a dupe. Quite the contrary—he admires her greatly, commenting upon her death, “God rest her. She was the only completely kind person I ever knew.”

Could that be true? That Melanie, in all her own basic human frailty, is some spiritual wunderkind, blessed with a preternatural goodness of heart that separates her from the rest of the human family?

Viewing the compendium of brief clips below that personify her spirit, we might be tempted to think so, but it may also be true that projecting those qualities onto her absolves Rhett and everyone else from even trying. But not trying is a choice too, whether the goal is to make a team, quit a bad habit, or become a more open-hearted, less snarky person tomorrow than we are today.

It is a truism of basic human psychology, after all, a kind of Therapy 101, that expecting or snarking upon the worst in others leaves us in a kind of defensive coil that dares not show much if any trust or tenderness lest it be trampled upon by the baser motives we convince ourselves lie at the bottom of every person who is “selfish and shrewd” enough to “look things in the eye and call them by their right name.”

Is the reason more people aren’t like Melanie because they don’t trust themselves to succeed, or perhaps more tragically, they don’t trust others not to take advantage of their goodwill if they do begin to succeed in living with a kind and trusting heart?

But really: what are the relative costs of living in distrust of others versus trusting them and then having that trust betrayed?

Do we come out ahead by becoming Scarlett, scheming to the very end (she makes yet another play for Ashley before Melanie’s blood has even begun to cool in her upstairs death chamber), obsessed by her own needs, seeing others either as helping or hindering that obsession, calculating, suspicious and mostly miserable all the while?

De Haviland addressed this point in a written piece soon after the movie’s debut and quoted here:

“The interesting thing to me is that Melanie was happy. Scarlett wasn’t a happy woman, all self-generated and preoccupied. But there’s Melanie, loving, compassionate.”

“Happy…loving, compassionate.” Or should the order of those change?

Perhaps the real meaning of Melanie’s approach to people is that if your goal is happiness, the road to it goes through love and compassion, concern and interest and belief in others, always looking for the best in them. With that as your default operating principle, your happiness will take care of itself.

And in the bargain, you get to help make those you touch happy as well.

With good will for the entire cosmos,
cultivate a limitless heart:
Above, below, & all around,
unobstructed, without enmity or hate.
Whether standing, walking,
sitting, or lying down,
as long as one is alert,
one should be resolved on this mindfulness.
This is called a sublime abiding
here & now.

—From the Buddhist “Karaniya Metta Sutta: Good Will” (Sn 1.8)

In case it has been a while…

Film photos and video in the public domain

6 comments to Melanie, the BuddhaChristLamaDoormat of “Gone With the Wind”