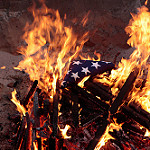 Republicans forged ahead despite threats of lawsuits, claims by Democratic Gov.-elect Tony Evers and others that they were trying to invalidate results of the November election and howls of protest from hundreds of people who showed up for a public hearing.

The lame-duck maneuvering in Wisconsin is similar to what Republicans did in North Carolina two years ago and is being discussed in Michigan before a Democratic governor takes over there.

It is impossible to overstate the outrageousness of these actions. Shameless, vindictive, dishonest, nefarious, underhanded, devious, undemocratic, immoral, indecent, and simply wrong in every way. It makes a travesty of representative government and makes me both furious and deeply sad, fearful for the very future of our country.

This is what we are faced with: There appears to be no bottom to the outright treachery of one of our major political parties. The rot is showing through clearly from the very top with a con man president, and it is percolating right down through various statehouses the party controls—in many cases due to blatant gerrymandering.

Why are there not at least a few Republican legislators in these states who will not be party to this latest perversion?

Where are the party’s voices on the national stage? The John McCains, the George H.W. Bushes of today? Is every shred of the entire party’s decency gone?

These actions make a mockery of this “national day of mourning” for a figure who is being hailed on this very day as an honorable and bipartisan public servant. By today’s Republican standards, he was a fool and a patsy.

Watch, though: Solemn, misty-eyed words about his fidelity to democratic values and humane governance will be spoken by multiple speakers today whose silence on this rapacious behavior taking place in the states will speak louder than anything else they say.

Protesters have descended on the Wisconsin capital of Madison, just as they have in Lansing and did two years ago in Raleigh. The outrage and denunciations have been full-throated, both from citizens and Democratic lawmakers. But for all their righteous passion, today’s protesters will likely be as effective as they were in Raleigh, or as my own howl of outrage is here now.

Which is to say, not at all.

But howl we must.

Streets have been burning recently in the City of Light as protesters decry what they see as a government blind to their plain-as-day struggles. Their government does not see, understand or represent their interests, they claim.

One wonders whether the repeated trashing of democracy and decency in this country will one day beget the same.

***
Leonard Cohen’s hopeful note on U.S. democracy, despite its faults laid bare. At least today, I wish I shared his optimism…
I’m sentimental, if you know what I mean
I love the country but I can’t stand the scene

9 comments to Mourning for Democracy in Wisconsin: A Short Howl of Outrage