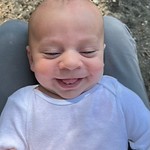 There are moments in life that become, unbidden and unexpected, Big Moments, when you drink in something so delicious that it defies easy description but leaves you with a sense of profound contentment, snug down to your bones, with a peace in your heart that, in the biblical phrase, “passeth understanding.”

And so it was with My Guy Kai (already shortened from “Makiah”), my recently minted (4-month-old) grandson, with whom I spent a goodly part of the past few weeks doing what all older folk with a pulse do with very young folk—bouncing him on my knee while making nonsense sounds, singing nonsense songs, breathing deeply while running my nose over his mostly bald head, burrowing kisses down into the folds of what there is of his neck.

Catching and then managing to hold his gaze for precious moments in my lap, eye to eye, grin to grin, a kind of gurglefest of epic satisfaction, writ so large across the heavens that it leaves notions of some future heaven feeling superfluous. 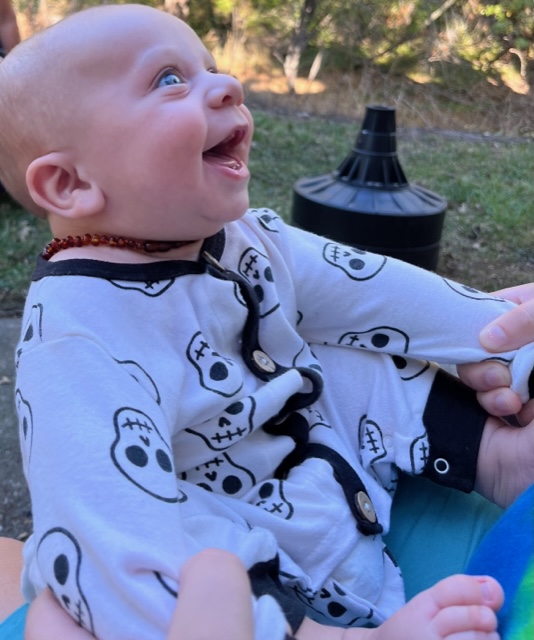 We were bidding adieu on the stairs leading to his bedroom, my last night in town, evening having descended, his sleep beckoning, one of his mamas pausing to direct his attention to his “Pops” for a last snuggle and farewell.

Every grandparent I’ve ever met has riffed on some variation of ‘Just you wait—it’s the best relationship ever.’ Turns out grandparents know a thing or two.

With him high enough up the stairwell to be level with my own gaze, we caught each other’s eyes and held, like friendly radars locking in on objects of mutual delight.

And there we lingered for a long, long moment, him, me, looking and looking, me hopelessly in love and acutely conscious this would be my last glimpse of him for several months, all that life and growth and wonder he would be encountering zipping right along before I would gaze upon him again as a changed man.

He, of course, not so much in love as being love, love incarnate, innocent, open, world-loving and true, precious few counter-narratives having occurred to or been imposed upon him at his tender age of 1/3.

His face, as it so frequently is (lucky parents!), a merry moon, his eyes with that glint of pleasure and joy that marks a hunger satiated, for now, but which gives every indication it will meet the morning when it comes and climb right up on its back for another ride.

I was overcome with joy and gratitude when my daughter was born. (Evidence below…) Those are certainly present again, but it’s different, too, time’s passage and the generational hand-off being what they are.

Back then, despite my middle age, I felt we were starting out on a grand and uncharted adventure, the beginning of building something reaching its tentacles far out into a future that I would long be a part of. 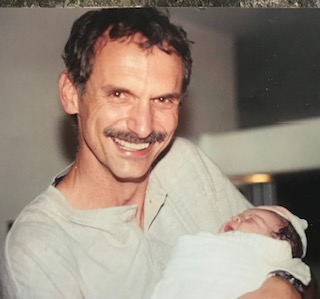 At the turn of the millennium, a year and a few months after my daughter was born, I was certainly aware but not beset by mortality. My mother and brother and many older friends of the time were still alive, and most all my peers were in the prime of their lives.

Now, most all the older generation that spawned mine has passed on, and my peers and I have to be vigilant that every gathering isn’t consumed by a kind of 4th Quarter Report of who is gone, who is going, and who is prepping for one of the spare body parts the seemingly teenage surgeons are inserting into us with all the workaday, ho-hum sobriety that car mechanics used to exude when changing our fuel pumps and spark plugs.

Lest that sound like a complaint, let me say that in its own way, this truly is the prime of my life.

Sure, my hip is sometimes sore for days after a hike, my short-term memory is skidding into sandtraps of varying depth, and pedaling my bike lately up even a modest incline leaves me feeling like I just staggered across the finish line of an ultramarathon through Death Valley.

Not to mention that friends are dying or wishing to, or worried that those memory sandtraps referenced above are turning inexorably into quicksand.

The easy thing to say here is not only that I’m fortunate to be alive and healthy at all, but that my grandson has given me more to live for as another generation bursts into existence, with all its attendant hope for the future.

All true enough, but that’s not the whole of it. 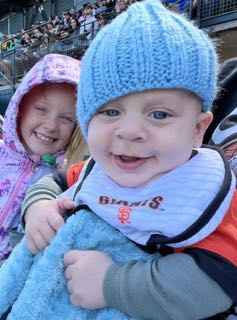 The other part has to do with the purity and depth of that encounter in the stairwell, in and of itself. And of a quite similar one several days earlier as he sat in my lap. Both times his long gaze into my eyes was unbroken, his intention and outreach egoless and pure, unadulterated by any ploys or strategies to win any favor other than my participation in this marvelous little Dance of the Humans—this intermingling of sociable souls.

Babies may come into this world with not a clue of what awaits them, but they are oh-so-fast learners, making use of the abnormally large brains evolution has bequeathed their species to tend to and absorb countless stimuli in their environment. When most all that stimuli come from doting parents focused on the baby’s comfort, curiosity and cheer, they lap it up like they do mother’s milk itself.

Love and milk: the two essential nutrients to feed their physical, emotional and social selves.

Were these treasured encounters portents of what awaits us if the fates are kind and I am able to see him often enough in coming years to forge bonds of durability and care? I hope so. I’d be a fool not to want more, to want to be more for this child who seems to be adapting to this human thing with such free-flowing joy.

But all that is in the future, a mix of speculation and hope, none of it promised. For now, Kai is my main guy, and as an added bonus, there’s his sister Paislee (pictured above, at Kai’s Major League debut last week), an exceedingly bright spirit in her own right, thrown into the mix for a while now as my step-granddaughter.

Every grandparent I’ve ever met has riffed on some variation of “Just you wait—it’s the best relationship ever.”

Turns out grandparents know a thing or two. Think I’ll try to stick around for a while and see what else I might learn from them—and their progeny.

16 comments to My Guy Kai