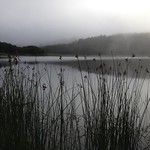 Swimming is a fine and salutary activity—aesthetically pleasing, easy on joints, good for heart and soul, huge fun for kids exhausting themselves on a summer day splashing around, playing “Marco Polo” and hoisting themselves onto the deck for endless cannonball jumps into the water as parents keep an eye out from nearby chaise lounges, the drink holders securing their refreshments of choice.

What’s not to love?

Pulitzer Prize-winning poet Maxine Kumin (1925-2014) loved swimming too, but her “Morning Swim” poem, first published in “The New Yorker” magazine in 1962 and later in a couple of collections, isn’t about any of the swimming described above.

Kumin was a lifelong swimmer (on the team all four years at Radcliffe) who took to the water with a poet’s sensibilities. The particular swim she describes—in the “chilly solitude” of dark morning fog in a lake, “oily and nude” after hanging her bathrobe on the dock from where she embarked—is so full of sensual context that she would have been committing poetic malpractice not to give it full explication and allow the imagery to bloom.

The poem’s 24 lines proceed in rhymed couplets (two-line stanzas with the last words in each rhyming). Let’s read it now before bestowing upon it some well-deserved appreciations. 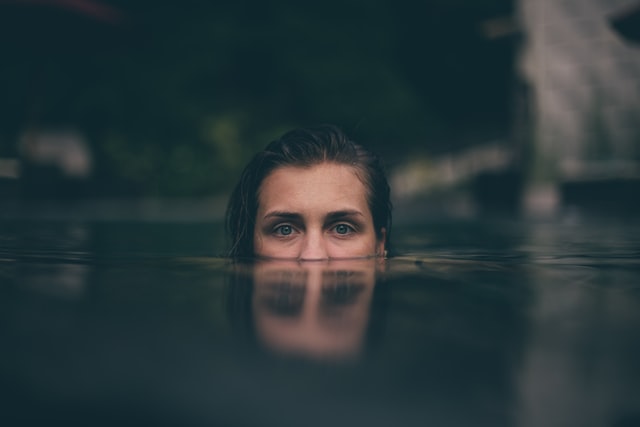 Into my empty head there come
a cotton beach, a dock wherefrom

I set out, oily and nude
through mist, in chilly solitude.

There was no line, no roof or floor
to tell the water from the air.

Night fog thick as terry cloth
closed me in its fuzzy growth.

I hung my bathrobe on two pegs.
I took the lake between my legs.

Invaded and invader, I
went overhand on that flat sky.

Fish twitched beneath me, quick and tame.
In their green zone they sang my name

and in the rhythm of the swim
I hummed a two-four-time slow hymn.

I hummed “Abide With Me.” The beat
rose in the fine thrash of my feet,

rose in the bubbles I put out
slantwise, trailing through my mouth.

My bones drank water; water fell
through all my doors. I was the well

that fed the lake that met my sea
in which I sang “Abide With Me.”

We start with an “empty head.” A poet, empty-headed?

Well, it’s morning, and a foggy one at that. But Kumin isn’t referencing mental thickness here, but rather an openness, a blank slate at dawn, ready to absorb what the day may have on offer.

And she finds out readily enough in beholding the “cotton beach” and dock wherefrom she will “…set out, oily and nude/through mist, in chilly solitude.” 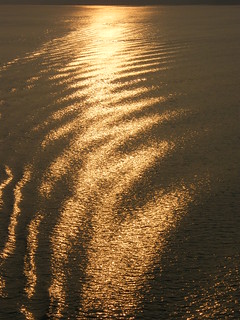 The imagery here is acute, a kind of word painting in which we easily conjure in our mind’s eye a lithe and oiled swimmer, naked to the world, enveloped in quiet morning mist. We can almost feel ourselves shivering along in her “chilly solitude,” barely visible, insignificant, as in some minimalist Japanese art showing the mist over a lake, the water lapping lazily, dancing with its own shadows.

But then the abrupt switch to metaphor, of “no line, no roof or floor/to tell the water from the air.”

It is all of a piece for this swimmer in this setting, fully immersed and absorbed, nothing separating or distinguishing her from the water that cradles her, the still-dark sky above and perpetually dark floor of the lake below.

All is one, and all is well.

This dissolving of boundaries is then rendered complete with the image of overt sexual union: “I hung my bathrobe on two pegs./I took the lake between my legs,” followed by the acknowledgment that as much as the lake has invaded her, she has done the same to it, “invaded and invader” in a dance as old as time.

The second half of the poem continues the alternation of the tangible and the metaphorical, the fish twitching beneath her from the alien world of their “green zone,” yet with whom she imagines a kinship as “they sang my name.”

And then the rhythms of nature, of which she is very much a part. We hear the slap-slap of her swim strokes, the in-and-out of her breathing, her capacity as a thinking, imaginative animal giving rise to her singing a song, a Christian hymn, no less, “Abide With Me,” its perhaps best known lines putting a slight twist on 1 Corinthians (“Oh death, where is thy sting?) with this:

Where is death’s sting?
Where, grave, thy victory?
I triumph still, if Thou abide with me

With her strokes keeping time with the music, we behold bubbles trailing “slantwise” through her mouth, and then dazzling metaphors of oneness again:

My bones drank water; water fell
through all my doors. I was the well

that fed the lake that met my sea
in which I sang “Abide With Me.”

Kumin takes us through multiple worlds in a mere 24 lines, ending with our swimmer at peace, the lake meeting her sea, abiding with her, not the least bit alien to her or any of us if we but give ourselves to it, fearless, naked and free.

8 comments to Not Just Splashing Around: Maxine Kumin’s “Morning Swim”