Notes From a Newtown Memorial Service: Is God a Christian? A “None?” 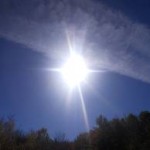 True, most everything that is best about religion happens in the countless acts of kindness and service, charity and community that take place in everyday life far from microphones and the public eye. But sometimes public actions speak volumes about religious sensibilities, and only rarely have we seen as stark a contrast in those sensibilities as we recently did in actions by the Lutheran Church Missouri Synod on one end and the Dalai Lama with his friend Archbishop Desmond Tutu on the other.

One situation confirms all that has been most divisive about the practice of religion over the eons, with its oppressive doctrinal disputes and claims of exclusive access to ultimate truth. The other points to possibilities—and actually, the necessity—of where religion must continue to evolve if it is to maintain widespread relevance in the future.

Out there in the Lutheran Missouri Synod, church authorities decided to figuratively tar and feather one of their own, demanding an “apology” from Reverend Robert Morris of Newtown, Connecticut, whose transgression was to participate in an ecumenical public memorial service that brought together various faith leaders (along with President Obama) in the Newtown community after the tragedy there. Apparently, Rev. Morris’s presence on stage with representatives of “false” religions (which would appear to be every religion that is not Lutheran Missouri Synod) did severe harm to his tradition and the God it deigns to serve and represent.

“The fear is that by sharing the stage with false teachers, I have diminished the proclamation of the truth which is ours by grace through faith in Christ,” he wrote. “I apologize where I have caused offense by pushing Christian freedom too far, and I request you charitably receive my apology.”

Morris initially defended his participation in the service, which had been steeped in the simple purpose of the assembled clergy “offering their love, care, and prayer for their families and communities,” he wrote. Followed by: “I had likewise spent time with my fellow clergy in Newtown clarifying the ways I can and cannot engage in events like joint clergy dialogues (which are good to engage in), joint caring efforts (only within limits), and joint worship (not possible).”

Joint caring efforts only within limits? Joint worship not possible? Have there ever been sadder words than those written on any religious landscape?

Clearly, the human longing for a sense of wonder, meaning and community is boundless, while the appetite for clinging fiercely and judgmentally to doctrinal differences that would continue to drive a wedge into those universal needs is waning…

This situation illustrates why the fastest growing religious segment in the U.S. is the “Nones,” meaning no religion at all. Last year, 77 percent of Americans told Gallup pollsters that religion remains “moderately or very important” in their lives, while “confidence in the church/organized religion” plunged to an all-time low of 44 percent. Clearly, the human longing for a sense of wonder, meaning and community is boundless, while the appetite for clinging fiercely and judgmentally to doctrinal differences that would continue to drive a wedge into those universal needs is waning, step-by-sometimes-halting-step.

On the flip side of the Lutheran Missouri Synod’s exclusivist dogma are kindred spirits the Dalai Lama and Archbishop Desmond Tutu, the former a non-theistic Buddhist and the second a crucifix-wearing lover of Jesus. They continued making news last week when Tutu visited his old friend in India, where Dalai Lama is still welcome after his longtime exile from his native Tibet. In the Huffington Post, a book excerpt by the Dalai Lama’s co-writer Victor Chan described a previous meetup between the jocular pair whose broad-scope, big-tent understanding of religion stands in such stark contrast to the Lutheran Missouri Synod’s. 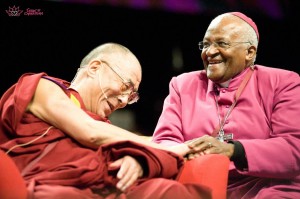 In a line both playful and profound (and likely incendiary among those not inclined toward notions of universality in religious understanding), Tutu proclaimed in the Dalai Lama’s ear the title of his forthcoming book, “God is not a Christian.” While this notion strikes me as obvious and voluminous in its truth, I must also admit I have never even considered God’s religious affiliation before. God—God!—the source of universal mystery and meaning and wonder—a follower of a specific religious tradition? If God did have a favorite among the thousands of traditions rising and falling through human history, which would it be among the even more thousands of denominations that have overflowed those traditions? Which schism of schism upon schism has God followed and endorsed through the ages?

Questions such as these collapse under the most minimal rational scrutiny, evoking just the kind of playful repartee that flows back and forth between the Tutus and Dalai Lamas and, before them, the Thomas Mertons and D.T. Suzukis of the world. “Religion isn’t about believing things,” the religious scholar Karen Armstrong once told an interviewer for Powells.com. “It’s ethical alchemy. It’s about behaving in a way that changes you, that gives you intimations of holiness and sacredness.”

That search for a sense of “holiness and sacredness” after the carnage of Newtown, I would submit, has to be in the suffering all humans of goodwill share and try to help ameliorate by their presence with one another, in human solidarity, from whatever religious tradition (or lack thereof). Dividing ourselves yet again, as the Lutheran Missouri Synod has done in this lamentable fashion, serves only to increase the existential pain that humanity shares in the wake of the evil that continues to confront and confound us.

4 comments to Notes From a Newtown Memorial Service: Is God a Christian? A “None?”